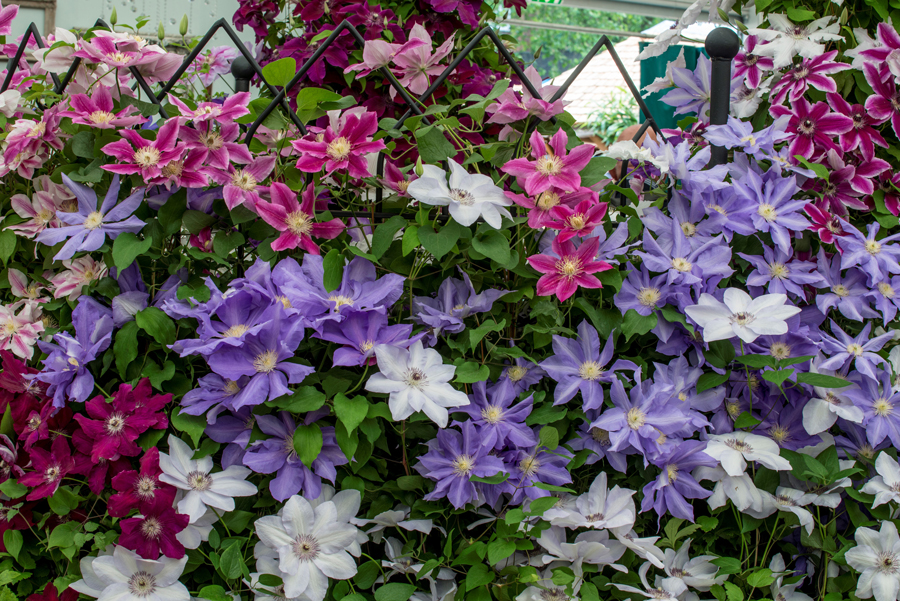 With ten Gold Medals under their belt at the Chelsea Flower Show, Thorncroft Clematis have an exceptional pedigree when it comes to floral exhibition and growing Clematis. Sandy Felton talks to Director, Peter Skeggs-Gooch and discovers how a family version of the ‘good life’ turned into a thriving business.

The story behind the success of Norfolk based Thorncroft Clematis, or rather Peter Skeggs-Gooch’s involvement in it, is not as straightforward as it might seem. Despite now running the family business, Peter’s direction in life might have been very different. 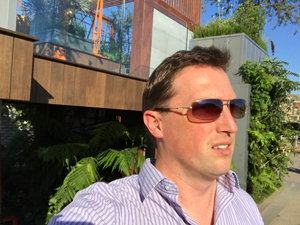 His parents bought an old farm house in the middle of rural Norfolk with the intention of starting their version of the ‘good life’. As he explains it had space for horses, a vegetable garden and small hobby nursery to keep his mother out of mischief while Peter,  then aged five, and his brother were at school and dad at work. Mum Ruth, with the help of Peter’s grandparents, Geoffrey and Dorothy Tolver, opened Thorncroft Clematis Nursery in March 1989. (pictured left: Peter Skeggs-Gooch)

Fast forward a few years and what started as a hobby began to turn into a highly successful nursery. However, Peter confesses that he was more interested in joining the RAF or possibly the police service rather than work in the family business. Then in 2000 he jokingly offered his services to his friend Alistair Keay in Christchurch, New Zealand – Alistair also had a clematis nursery – for their growing season, which happened to coincide with the UK winter. This was simply in return for his board and lodging and to Peter’s delight Alistair accepted.

While he was working in New Zealand he met Dean Miller, who was a similar age to Peter. The offer of joining him on a plant hunting expedition in the Southern Alps, just west of Christchurch was too much of an exciting prospect to miss, so off he went. It was here Peter had his Damascus moment when he discovered his first wild Clematis: “I was following Dean along a steep and narrow, unmade footpath with high undergrowth on either side, rain falling and a misty fog all around us. As we made our way towards the top of one particular hill, Dean’s foot brushed against the undergrowth and there was a brief flash of dazzling white.” After walking in silence for the past half-hour, Peter’s shout to stop caused Dean to turn around in some alarm especially when he found Peter on all fours in the mud. 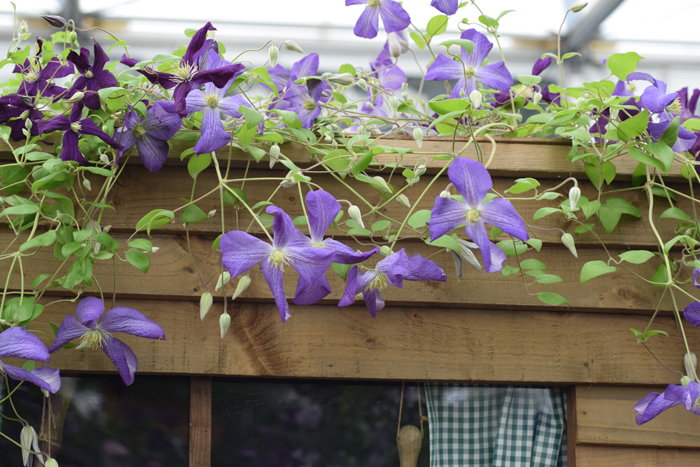 It’s easy to picture the scene – Peter with a wide smile on his mud streaked face as they both knelt in their waterproof trousers and coats, soaked to the skin, tired, hungry and now covered in mud, admiring the slightly muddy white flowers of clematis paniculata.

Discussing their discovery later over a ‘liquid debrief’ Peter realised what a wonderful opportunity he actually had, living in England on a specialist clematis nursery, surrounded by hundreds of different cultivars of this wonderful genius of plant: “Needless to say, I returned home full of enthusiasm and a love for clematis that my parents had never seen in me before. My thanks go to Alistair and his wife Jenny for their generosity and hospitality and Dean for his companionship and kindness.” 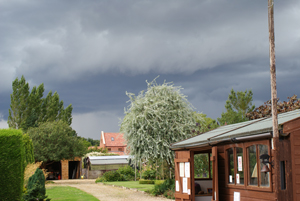 Peter loves the social aspect of growing clematis and running the nursery (pictured right): “I love meeting new people, engaging with the public at flower shows, being able to share my love and passion for this wonderful garden plant,” he says. “I particularly enjoy public speaking for garden clubs and societies which gives me an excellent opportunity to encourage people to grow these versatile plants in different and interesting ways. It’s also a valuable time to help people who have had difficulty with clematis in the past and who need accurate advice on how to succeed with them in the future.”

He explains that one of the greatest attributes of clematis is its natural ability to grow as a companion to other plants, predominantly small trees or large shrubs: “This means that clematis are naturally versatile and can be used in many ways that the gardener may not have considered before,” Peter says. “They are superb growing with other climbing plants like wisteria, a well-trained cotoneaster, berberis or honeysuckle and will often prolong the flowering interest after other plants have finished blooming.” Peter explains that one of the best companionships is between clematis and roses because their love of good soil yet free draining conditions at the root is mutual and means that it is easy to grow them together.

Despite growing over 400 different cultivars of clematis, Peter admits it is easy to pick out which one is his favourite – for him it is not only a wonderful plant but it reminds him of how he came to love clematis – ‘Aotearoa‘, raised by his friend Alistair Keay from the New Zealand Clematis Nursery at Christchurch.

“A wonderfully prolific clematis flowers on my south-east facing porch from early July until mid-September almost non-stop,” Peter explains. “The blooms start from about 2 feet and carry on right to the top of the plant at about 8 to 9 feet high, almost at the gutter. I have a clay soil which is well improved with manure and bone meal and because it was planted carefully, I rarely need to feed or water it, so it really has to get on with things by itself and it certainly does. Each February it gets pruned to about 12 inches from the soil and I give it one handful of bone meal then I tell it to get on with it.” ‘Aotearoa’ is the Maori name for New Zealand and translates as ‘Land of the long white cloud‘: “My recollection is that in Maori, words are pronounced in blocks of three letters at a time with a strong phonetic sound so ‘Aotearoa’ will be Aot-ear-oa,” Peter points out.

For as long as I have visited Chelsea I have always admired the Thorncroft stand and its one of the first I go to in the Great Pavilion. Thorncroft have been going to the Chelsea Flower Show since 2001 and during that time have succeeded in gaining 10 Gold medals with a run of eight Golds in a row, something they are rightly proud of.

Peter explains that back in 2016 they were invited to apply for the very first RHS Chatsworth Flower Show taking place in June 2017: “This show was going to focus on design innovation and inspiration and I had what I thought was a fantastic idea. I announced to my mother that I wanted to build a Chatsworth exhibit completely from reclaimed materials, structures and containers focusing on architectural salvage. Her expression said ‘have you taken your medication?’ However, after some persuasion, sketches and a visit to our local salvage yard she was persuaded to take on the project and she thoroughly enjoyed it too!” 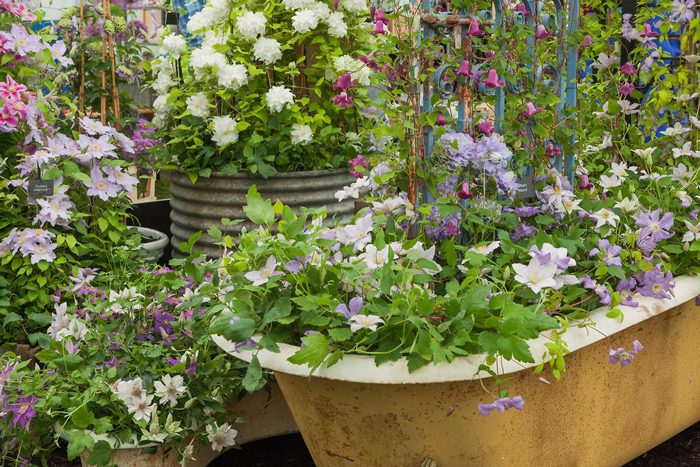 The Chatsworth exhibition took the form of a roll-top bath with clematis Queen Mother in it, a salvaged vintage shower with clematis Prince Charles in it, among a whole host of other interesting artefacts and of course wonderful clematis plants.

Peter explains that this exhibit gave him the perfect trial run for Chelsea 2018: “We will really be pushing things to the limit this year,” he explains. “We will be creating our biggest exhibit ever creating a Boulton & Paul inspired Reclamation and Clematis Garden inside the Great Pavilion. It will be surrounded by wrought iron estate railings and iron gates will lead the way in along a meandering path on either side of which will be containers, obelisks and other structures clothed with our beautiful clematis.”

The planting theme Peter has chosen for Chelsea 2018 will be ‘A Royal Celebration‘ so they will be exhibiting as many clematis with Royal names or connections as they can: “The highlight of this planting will be the introduction of a new clematis named Prince William, a stunning new summer flowering clematis with a plummy-red bell-shaped flower,” says Peter.

As Peter points out, planning for Chelsea can take a whole year and sometimes it’s necessary to do a trial run: “Which in this case, we did at the 2016 RHS Chatsworth Show, to ensure that our ideas and more importantly, our abilities, were up to the task!” 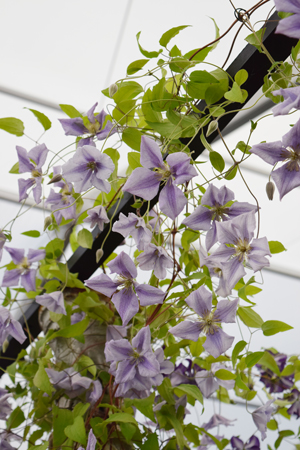 Among the most popular clematis are those from the Viticella group. They are robust summer flowering plants and very forgiving of most soils meaning they can be grown on heavy ground like clay as well as lighter sandy soils or a coastal environment: “The Viticella have a small flower but what they lack in size they make up for in quantity and a long flowering period,” explains Peter. “To name two of the best I would choose, ASTRA NOVA PBR ‘Zo09085’ and ‘Chatsworth’.” He adds. (pictured left: C. Chatsworth)

Asked if he has some good tips on growing clematis he points out that he has received a lot of help and advice from three generations of his family: “First would be my grandfather – careful planting is the key to success. Put 90% effort in on day one and for the rest of the plant’s life you only have to put in the last 10%.” He taught Peter that you needed to dig a good size hole and improve the planting hole with around 50% of rotted garden compost or well-rotted manure, added at the bottom of the hole and lightly dug in so that some of the surrounding soil becomes incorporated with it. A handful of bone meal prior to placing the root of your clematis in the hole and then gently back-fill.

Peter’s mother has taught him that you are unlikely to kill Clematis by pruning it wrongly – pruning can be considered complex and the advice on the internet is variable and sometimes misleading; “Do not be afraid of pruning your clematis because I can promise you that if I did it for you, I would cut them a lot harder than you would,” he says.

Like many people of his age, Peter admits that one of his passions is technology, so he has always had an interest in being ahead of the curve when it comes to things like Thorncroft’s website, stock control systems or even social media: “Technology has progressed at such a rate that today the majority of our young plants are produced on a production system, with state-of-the-art computers which control the temperature, humidity and to some extent the day length that young cuttings get.”

At Thorncroft they run an integrated pest management system involving the use of beneficial insects to control pests instead of using chemicals and they are proud that around 90% of their plants are UK grown. 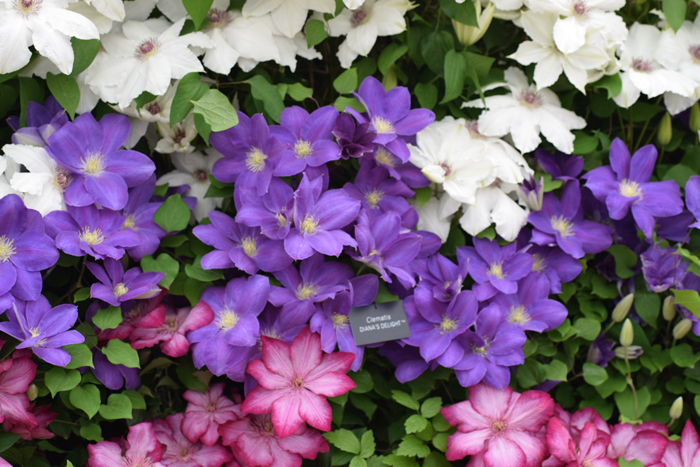 The cultivars listed in the Thorncroft catalogue and website have all been selected for their special merits – length of flowering, period, colour, form and quantity of blooms – in fact, generally, because they are ‘good doers’ and worthy of space in the garden. Assisted by a dedicated team of staff, (including Peter’s wife Gillian who helps out between looking after their two children) Peter is constantly looking for ways to help the nursery grow and develop. Their website is full of useful information on plant care and the range of clematis is jaw dropping so it is well worth a browse in order to find the perfect clematis for your garden.

We wish Peter and his team well in their preparations for RHS Chelsea Flower Show 2018 and look forward to seeing their ‘Royal Celebration’ theme in the Great Pavilion.

Photo credits: All photographs are strictly © of Thorncroft Clematis