Enjoy a garden visit at the Henry Moore Foundation 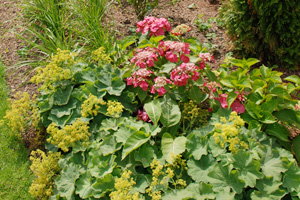 Perry Green, in Hertfordshire, was home for over 40 years to sculptor Henry Moore, his wife Irina and later their daughter Mary. Over this time, Irina Moore transformed an area behind their house, Hoglands, into a beautiful border garden, dividing it with paths and introducing structural levels. An apple orchard and kitchen garden were also created.

From the late 1950s, Henry Moore acquired more land, extending the boundaries of his estate beyond Hoglands to create further studios and grounds for displaying sculpture and he and Irina worked together to adapt these new areas with Irina introducing specially sited shrubs and trees to frame the outdoor sculptures. In 2007 Hoglands was renovated and opened to the public. At the same time the gardens were re-instated by garden designer Yvonne Innes, based on historical photographs from the Foundation’s archive as well as advice and support from Mary Moore. The resulting scheme reflects Irina’s original style and flowers from late spring to early autumn.

Inside the house visitors can see the original furniture, artworks and personal belongings seen as much as they were during the Moores’ lifetime. Mary Moore has described the interior as being ‘almost exactly as it was when my parents lived in it.’

A visit to the house and garden includes Moore’s outdoor sculpture, his former studios, an exhibition gallery and a medieval Aisled Barn with tapestries. Today, the 70 acre estate is the headquarters of The Henry Moore Foundation, an award-winning charity established by Moore in 1977. It is open to visitors from 1st April to 30th October 2011.

Visitors can enjoy an unforgettable rural landscape fringed with colourful herbaceous schemes, tree walks, orchard and evergreen and structural planting year-round. The intimate greenhouses, where Irina grew many varieties of cacti and orchids, are also open to the public.

A small team of gardeners work year round to maintain the grounds and conservators do the same for Moore’s sculpture.

Groups are welcome and you can book for a tour inside the house, Hoglands, home of the Moore’s. For opening times and further information log onto: www.henry-moore.org