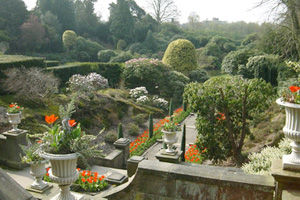 Biddulph is a series of themed gardens within a garden and is one of the most exciting survivals of the great age of Victorian gardening. Its concept dates back to 1842 when James and Maria Bateman bought the estate.

Bateman had already established an important orchid collection at Kynpersley Hall and in 1838 married Maria Egerton Warburton, who came from a leading Cheshire family with a creative gardening tradition – her brother was the creator of the garden at Arley Hall. Maria herself had an interest in gardening especially herbaceous plants such as fuchsias and lilies. In 1840 they moved to Biddu lph from Knypersley, extending the existing vicarage in an Italianate style and creating new conservatories in which they grew camellias and ferns.

Edward Cooke, the famous marine painter, paid many visits to Biddulph Grange. The son-in-law of nurseryman George Loddiges, Cooke was also passionate about plants and both painting and designing gardens. Together the Batemans and Cooke inspired what was to become a delightful and extraordinary garden.

I was shown around the garden by Chris Belford of the National Trust (NT). Chris explained that the garden is laid out on marshy land to the south-east of the house. The house, in fact, does not form part of the NT property, it is solely the garden which the Trust has taken over and restored.

I really wasn’t quite prepared for Biddulph. I had heard about it but failed to grasp both its importance in the history of gardening and its really quirky attractions. My first view of the garden is from a terrace overlooking The Italian Garden with its bright red tulips – stunning.

Here is the world in a garden – you move from country to country through tunnels and alleys, up and down steps and rockeries. One of the most striking moments is emerging from a dark tunnel into China – this takes your breath away!

For twenty years from 1842 Bateman brought plants from all over the world to Biddulph, creating a series of microclimates among the rockwork, topiary and tree stumps. You move from a damp Scottish glen into a Chinese “willow-pattern” garden complete with stone gateways, wooden footbridge and temple. You can wander through Egypt and discover the Ape of Toth, stroll through The Pinetum, discover the Wellingtonia Avenue or linger around the Rose and Verbena Parterres. Wherever you wander there is an array and variety of fascinating plants.

The garden makes good use of a range of topiary – there is even a topiary pyramid – while the Victorian’s mania for dahlias is catered for in the lovely Dahlia Walk with its Shelter House which has been reconstructed from old photographs. The stumpery totally fascinated me and I can see now why gardeners are so keen to have them in their gardens.

One of the gardens greatest surprises, The Egypt Garden, was inspired by the French invasion of Egypt in 1798. This led to a revival of interest in Egyptian art and architecture reflected in gardens by the use of pyramids and obelisks.

Biddulph is the only place that I have seen upside down trees – one of Bateman’s more eccentric novelties – with their roots in the air and their trunks down into the ground! Just one of the quirky features of this delightful garden of discovery. Lending evidence to the fact that behind the austere face in the picture of Bateman lurks someone with a special sense of humour.

Peter Clarke has recently taken over as Head Gardener at Biddulph and I asked him what was special for him in the garden: “I think it was when I first saw the garden back in 1988. It was actually going into the dark tunnel and coming out into the light of China and that was something that excited me about the garden. I think also it’s the changes of level and the changes of different little gardens within what is a really small garden and the interesting plant collections.”

As Peter points out gardening at Biddulph has its challenges. It is a very wet site with water coming into the garden from the adjacent moor but it is also time consuming: “Everything has to be carried up the steps,” explains Peter. “When we dig the Dahlia walk, for example, we can get the manure up to the Lime Walk but then it has to be carried up the steps so it takes time.”

Although the major restoration of the garden has now taken place Peter realises more than most that the garden will need to continue to evolve within the original fixed design. “i think the time has now come to really look at a lot of the planting, some of which has failed, perhaps from a condition point of view or whatever”, he explained. “It’s time to go back and re-address some of the areas and get things right. If it hasn’t worked why hasn’t it and what can we do to improve it.”

Sadly, Bateman did not remain at Biddulph to see his wonderful creation mature and flourish. By the late 1860s the cost of maintaining the garden was proving beyond his means. He passed the estate to his son who sold it in 1871. The garden was taken over by Robert Heath who maintained the gardens to a high standard while his son made extensive alterations to the house only to see it largely destroyed by fire in 1896.

Eventually, the house became a hospital which it remained until recently. The decline of the gardens continued and in the 1960s the whole area was suffering badly from vandalism. When the Trust acquired the garden in 1988 it embarked on its most extensive restoration project and today visitors can see the rewards of that dedication with Biddulph returned to the glory of its Victorian heyday.

I have visited many gardens but Biddulph has proved to be one of the most enjoyable and entertaining and I will certainly return.

Our thanks to Chris and Peter for their time and in sharing with us the delights of this lovely garden.