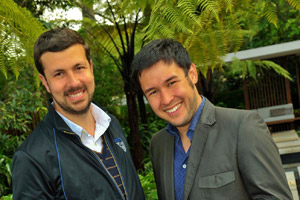 Sandy Felton talks to ethnobotanist James Wong about his passion for plants, food and his mission to bring the science of plants to the masses.

When you meet someone who is really passionate about their work, it’s hard not to be infused with the same kind of zeal. James Wong is one of those guys – his enthusiasm for plants and their uses is infectious, his knowledge awesome and his total desire to inspire us to go out there and appreciate plants, not just for their pretty colour or foilage but their many uses, is commendable.

A power-house of plant knowledge, he has embarked on what seems like a Messianic mission to debunk the myths, encouraging us to see plants not just as ‘pretty things’ but to understand that it’s their uses that really bring them to life and give them value.

In the modern pill popping 21st century we have forgotten many of the medicinal usages of plants as practised by our ancesters – so important in medieval times and down through the centuries. In his popular television series, Grow Your Own Drugs, James has re-awakened our interest in plants and their uses and in no small way has been responsible for a resurgence in understanding the value of plants not just as decorative ‘pretty things’ but as natural aides for all manner of uses.

“Growing up in Asia, where plant based medicines have never stopped being used, we have never been handicapped by the misleading belief that herbal medicines were all just airy fairy and ineffective”, he explains. “In fact with as many as 50% of the world’s most popular pharmaceutical drugs having been originally derived from natural sources, the boundaries between the two can be seen to be at best blurry.”

For him it’s a shame that all the amazing things plants can be used for seem merely to be seen in Europe from the decorative point of view: “It’s their uses that bring them to life and they are very much understated here I think,” he says. “Because the medicinal side of plants is not as well written about and well considered as the ornamental side of botany in the popular media, I think that’s what makes them so interesting to me as there is so much stuff to find out that no one knows about.”

His delightful boyish exuberance for his subject is refreshing – but behind his natural easy going and pleasant manner, lies a strong determination to educate. In his native Malaysia, where James grew up, it is commonplace for people to treat themselves with natural remedies: “Growing up with the whole of society around you infused in plants is natural in Malaysia,” says James. “If you walk around any suburban neighbourhood or city housing estate in Asia, you will find every inch of space covered in plants and pots and most of them will be of use. You will find chilli, lime leaves and lemon grass growing in every kind of corner and container. They are important to people, even in built-up areas, part of their daily life and what they use on a daily basis.”

He cites the example of a curry which can have up to 27 different herbs and spices, all grown, whereas we couldn’t grow fish and chips in the back garden. Point taken!

He doesn’t get worked up by the sceptics who view alternative medicine as some sort of ‘hippy’ theory: “I think it works both ways – being a scientist I am very much evidence based and I wouldn’t support any particular natural medicine just because of its natural origin as such. I’d support it on the basis of whether its practical and has a probable efficacy. What annoys me is people who are universally sceptical about all plant based medicine without good justification, or those who are extreme proponents of it just because it is natural, without having the evidence either way.”

James found it fascinating that while at University his friends, who were very anti non-traditional medicine, would happily drink pots of coffee while cramming for their exams not realising that in doing so that they were effectively taking a plant-based remedy (the caffeine in coffee beans, helping stimulate the nervous system and relieving short term fatigue.)

He is pleased that Grow Your Own Drugs has raised a new awareness of the usage of plants: “I never sort of realised or expected anything to happen”, he explains. “I did not set out with any firm plans that I wanted to achieve in the programmes. I have been amazed at the amount of people who have come to me saying how much they have valued the programmes.”

Grow Your Own Drugs attracted more people than any other gardening based programme at the time and if evidence was needed as to its popularity or the fact that people were actually taking on board James’ suggestions, one only has to look at the programme with the hop remedy which resulted in stocks of retail hops being exhausted through the UK after the show aired.

He says he doesn’t really get any spare time. His TV work, writing, talks, lecturing and garden design business pretty much fill his life. He does admit to being an obsessive foodie though but his obsession, as one might expect, is not just in the eating. He is fascinated how food is put together what it contains and how it is created and how you can play around with the different ingredients.

James set up his own design business, Amphibian Designs, with friend David Cubero after the pair met through work three years ago. David is an agricultural engineer who later trained as a floral artist and together the pair have been responsible for a number of award winning show gardens. Following a Silver for The Burgbad Sanctuary at RHS Hampton Court in 2008, they arrived at RHS Chelsea in 2009 to create The Canary Islands Spa Garden winning them another Silver. However, their 2010 RHS Chelsea Garden, The Tourism Malaysia Garden, has sealed their reputation in garden design and saw them winning a much coveted Gold medal. 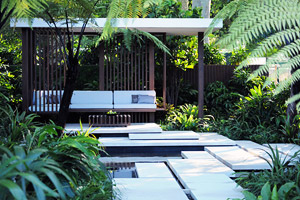 Winning the Gold at Chelsea came as a complete surprise to James and David: “In my wildest fantasy I thought if we won a Gold I would be jumping up and down, crying and thanking God – you know like they do at the Oscars – but you are just so tired”, James remembers. “David and I had been working on the garden for so long, 9 months, seven days a week with 16 hour days, eating lunch with one hand while we dug holes with the other. When they came with the medal I had no idea how to react, we looked at it and couldn’t process that it was a Gold!” He remembers being completely lost for words and muttering something to the effect of “Well I don’t know what to say.”

The Chelsea garden had certainly been a challenge for even the most experienced garden designer. The risk of frosts on tender tropical plants, even too much sun and the need for maximum shade, all had to be taken into consideration during those important build-up weeks. The good news, hot off the press, is that James and David have been accepted for Chelsea 2011 and I feel sure we can look forward to another stunning garden.

I asked James what plant he would take with him if he was stranded on a desert island. “That’s a horrible question, its like choosing between your children!” However, he chooses Aloe Vera because: “It looks wonderful, will grow in a desert setting, will give me sunscreen, is edible and medicinal and it’s the kind of thing anyone can grow.”

When challenged to identify someone who has influenced his life he has no hesitation in naming Sir David Attenborough: “Whenever you ask a botanist of my generation who inspired them they will probably answer it was Attenborough’s television series, The Private Life of Plants. I was already obsessed with plants and seeing this series when I was 13 took me to the next level. Part of my interest in getting into television and making programmes was that I wanted to produce programmes like that. If I could do a programme half as good that would be wonderful. He’s had such an impact on so many peoples’ lives and continues to do so, although he is well into his eighties. How awesome is that?”

The moral of the story is never to look at a plant simply as a decorative object – after all many of our major drugs have natural origins. Somehow, I feel that we shall have the benefit of James Wong’s enthusiasm and knowledge for some time to come and if that makes us both understand and appreciate the value of plants he will have served us well.

Amphibian Designs can be found at http://www.amphibiandesigns.com