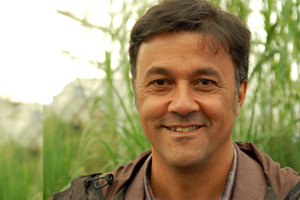 Cleve West (pictured left) has been designing gardens since 1990 but his life may well have taken another turn had he decided to concentrate on a career in sports rather than horticulture. As it turned out sport lost – gardening won – and happily we have all been the beneficiaries of his talent ever since. It was while looking after his aunt’s garden that he got the gardening bug. This became more compulsive after a visit to RHS Chelsea Flower Show when he finally decided that he really wanted to have a go at designing himself.

So it was off to Kew, which was not far from where he lived, to complete a design course with John Brookes: “When I found out that John was teaching there,” he explains, “I knew I had to sign up. John is not only one of the all time great garden designers he is a gifted and generous teacher. The growth of the garden design industry in this country is largely due to his influence so I had to get it from the horse’s mouth.”

For Cleve, Brookes was obviously a serious influence: “In terms of design and the understanding of outdoor space quite definitely,” he says. “But he is always advising students to walk their own path so ‘experimentation’ on top of a good grounding in basic design principles was encouraged.”

In 1994 he built his first show garden at RHS Hampton Court Palace. This led to his meeting up with sculptor Johnny Woodford, who collaborated with him on the garden, with the result that it won a Silver Gilt medal. The duo went on to win three Golds at Hampton Court followed in 2001 by a Silver Gilt at Chelsea.

If you ask Cleve what he has enjoyed most in the last five years he will tell you – his allotment: “Strangely enough I have enjoyed the fruits of an allotment that, in turn has led to writing. But I am first and foremost a designer and have enjoyed creating an unusual garden in Normandy and last year’s garden for Saga Insurance at Chelsea.” (pictured below). 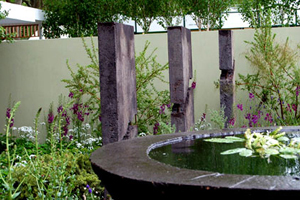 His popular column with The Independent Magazine allows him the space to talk about his allotment, a subject obviously dear to his heart. He recently commented that, “Allotments are no longer the sole ownership of the retired or the brown-rice brigade”. And quite right too – their popularity is increasing among all age levels and so they should – as he has pointed out, allotments are going to be the spearhead of the environmental awareness movement and a trend that’s going to become a permanent fixture in the way we garden.

He likes grasses and developing something of the wild space into a garden, but overall what inspires him? “Increasingly, the feeling for the space be it influenced by the house or the surrounding landscape. Most designers refer to this as a sense of place. But, if the budget allows and the client has an open mind, I like to tease and test this where possible.”

I’d heard he listens to music while sat at his design bench so obviously the question arises – what kind and does it inspire you? “I like pretty much anything from punk rock to classical. Much depends on the mood,” he says. “At the moment I’m listening to Jamie Smith (www.jamski.co.uk) a talented Irish fiddler. If I can find the time and a soundproof room I’m hoping Jamie will give me a few lessons.”

Sculpture is very much part of Cleve’s garden philosophy – so what advice would he give to the rest of us who might want to inject some excitement and interest in our gardens with the use of sculpture, no matter how small?

“Take your time. Visit sculpture gardens and gardens and galleries with quality sculpture in them to see what the possibilities are. You’ll get a feeling for materials, texture, scale and volume. You’ll also become more aware of the space around a sculpture and its setting. This can have a powerful influence on how the piece will be perceived. Eventually you’ll find something that will resonate with you and the garden you want to place the sculpture in.” Working with a sculptor to actually place the sculpture in the garden can be priceless. He admits his work with Johnny Woodford was extremely fruitful as they would always visit a site together before any design work was undertaken.

So what gives him the most satisfaction in gardening? “I love seeing a completed design and I was especially chuffed with the garden at Chelsea 2008 (pictured below). But it’s hard to beat coming back from a good day’s work at the allotment and eating fresh, organic, locally produced, delicious food!” I know what he means and this reference to his allotment is another indication of his love of a ‘hands-on’ approach to gardening – he doesn’t mind getting his hands dirty and is at his happiest when doing so.

He, more than anyone, knows that with climate change on everyone’s mind, we are going to have to become more aware of our local conditions and that growing food is also going to be big on the agenda: “Gardeners are going to have to think long and hard before implementing unsustainable planting schemes,” he says.

His Chelsea garden for Saga won a lot of acclaim. The garden had simple lines and generous proportions but there was a dramatic sense of energy and inspiration about it.

I just loved his three concrete monoliths. These were designed to create a screen to make the back of the garden more intimate and force a change in direction – it worked well and tied in with the concrete sculpture elsewhere in the garden: “The monolith is a form I like to use in gardens,” he says, “and this was a method of using the idea in a slightly different way.”

And finally what of the future? “Apart from a number of private commissions, I am thinking of having another go at Chelsea. Much depends on sponsorship at the moment. There are also plans afoot for a book about our allotment and a series of botanical drawings. I am also looking forward to visiting a number of gardens in India which is where my mother comes from. It will be my first trip there.”