Gardening links continue to flourish between North-East and Sweden 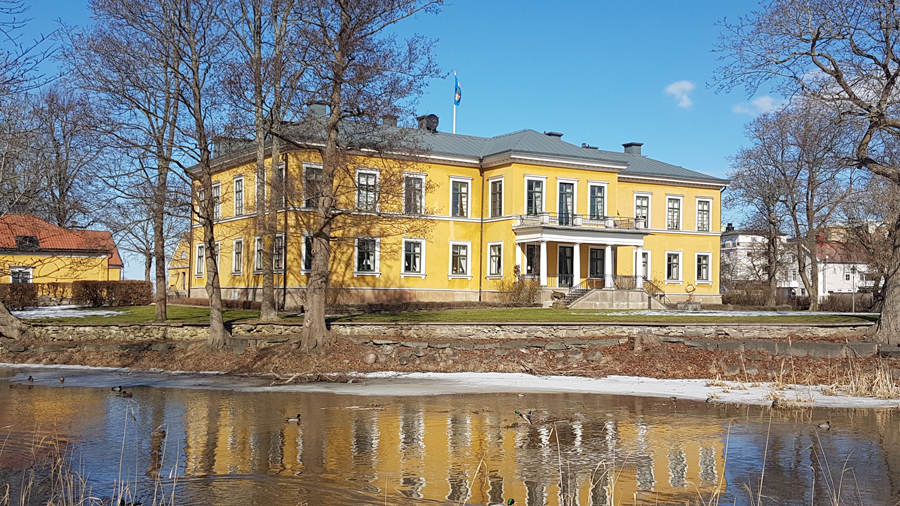 Garden writer and Country Diarist, Susie White, talks about the flourishing links between the North-East of England and the Gardens of West Sweden.

In 2017, I designed a classic English Garden for Jonsered Manor outside Gothenburg, a symbol of the collaboration between the National Gardens Scheme in North East England and the newly formed Gardens of West Sweden. Their garden visit programme is called Trädgards Resan and the website can be found at www.tradgardsresan.se

As members of the NGS county team, we have been advising them on how to set up a scheme of gardens open for charity and Sandy Felton wrote about it on this website last year. The garden, originally intended to be in place for just one season, was such a success with visitors that it is going to be kept permanently at Jonsered. 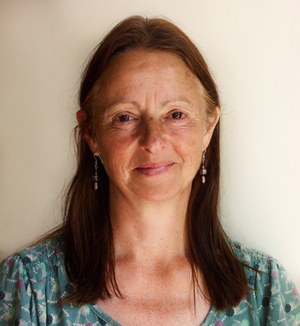 There are now plans to reciprocate with a Swedish Garden in the North East of England to be planted within Saltwell Park in Gateshead. This Victorian park, which opened in 1876, surrounds the Grade II listed Saltwell Towers and has around 2 million visitors a year. It’s a popular place with its ornamental and woodland gardens, boating lake, bowling greens, maze and events. (pictured left, Susie White)

As part of the process of deciding on the design, I was invited to go to Sweden to take part in a seminar and to give a series of talks about the Arts and Crafts Movement and its Gardening Legacy. Similar to us, Sweden has had a very late spring and gardeners have been finding it very difficult to begin seed sowing and preparation. Having run a herb nursery for many years, I really felt for the nursery owners who are trying to get ready for spring sales.

The seminar took place in Mariestad, a town on the eastern shore of Lake Vänern, the largest lake in Sweden, a town known for its beautifully preserved wooden buildings and its cathedral. It was held in the Residence, (pictured banner at top of page) the old county governor’s house, a graceful ochre yellow building with airy rooms, painted wooden ceilings and contemporary art works on the walls.

Nearby is the landscape garden school and a series of workshops where heritage skills are taught: lime plaster, timber framing, adobe bricks, plasterwork and other historic building techniques. Lars Runnquist from the Department of Conservation gave a tour, introducing the students who were practising grafting, seed sowing, taking cuttings and making protective screens from Phragmites reeds using a loom. Snow still lay over the demonstration plots of the garden school but I was interested in the use of ‘dry hedges’ to enclose compost heaps and leafmould; they were almost like artworks. 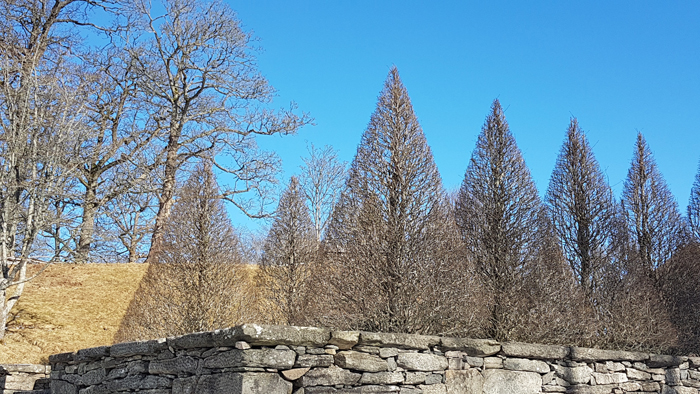 The seminar was attended by horticulturalists from the Gardens of West Sweden who will be opening their gardens under the new scheme this year for the first time. The aim has been to have 100 participating gardens within three years, so the fact that there are already 47 in this, the first year, shows the enthusiasm for the project. Part of the money raised will be used to start up a new fund for bees. Students from the gardens course at Gunnebo Castle had come up with a series of possible designs for the Gateshead Swedish garden. These were discussed in the seminar and their ideas will contribute to the final plan. 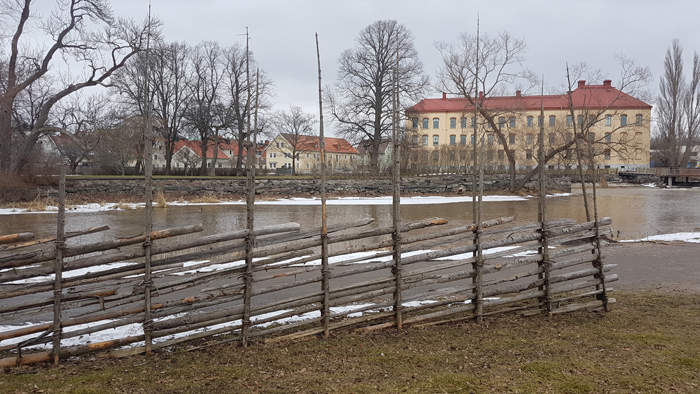 Next day I was shown around the grounds of Gunnebo Castle by Head Gardener Joakim Seiler, who, as well as his busy job, is doing a PhD on the use of historic gardening skills. Gunnebo has a formal Italian-influenced garden surrounding the eighteenth century summer villa of wealthy merchant John Hall. Thanks to the existence of the original plans by architect Carl Wilhelm Carlberg, buildings such as the orangery and large greenhouse are being reconstructed using eighteenth century techniques.The project gives a fascinating opportunity to work to older craft techniques under the master-apprentice principle. A large kitchen garden supplies the excellent restaurant.

The North East of England is a dynamic place for gardening. This year, a redundant area of Gateshead’s Quayside is being transformed by Diarmuid Gavin into an urban garden made using 90 shipping containers with bars, restaurants and art exhibitions.

The proposed West Swedish Garden in Saltwell Park will be yet another new garden for the North East. It will be a collaborative effort, with the Swedish team designing the garden, Gateshead Council providing the venue and equipment, and NGS and Saltwell Park volunteers doing the work to create the garden. Assistance will also be sought from local businesses, especially those with a Swedish connection.

Photo credits: All photographs are ©Susie White with the exception of photograph of Susie © and courtesy of Allan Pollok Morris

Susie is a Guardian Country Diarist and Member of the Garden Media Guild and the Outdoor Writers and Photographers Guild and an RHS Listed Speaker. Her website is: www.susie-white.co.uk