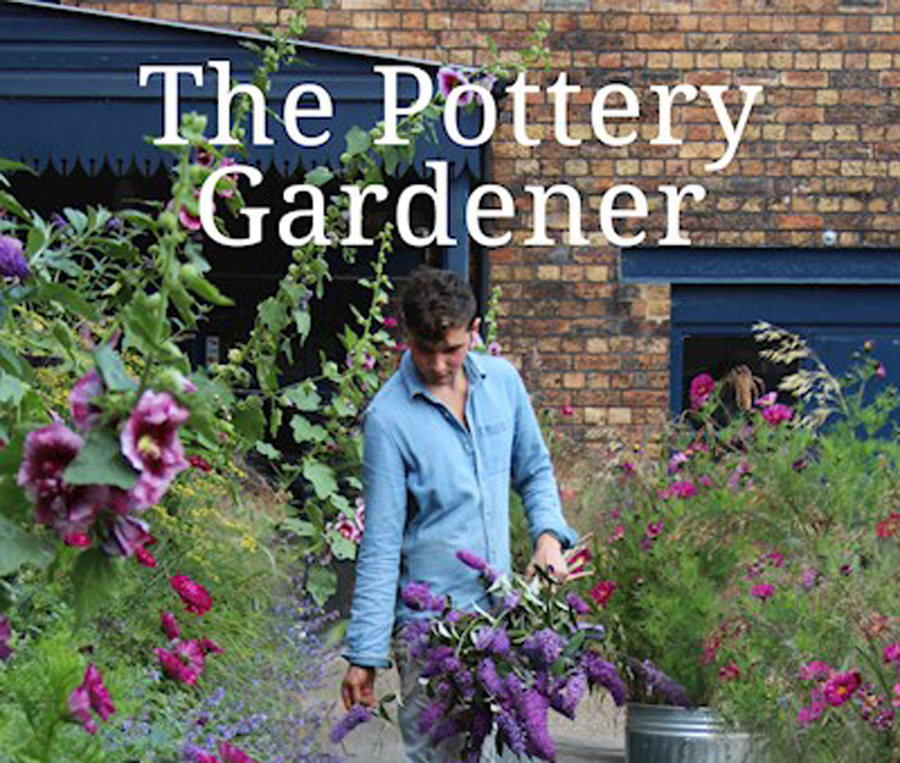 I have long been a fan of Emma Bridgewater pottery but had no idea that the Stoke-on-Trent factory had a garden. So, I was obviously very interested when ‘The Pottery Gardener: Flowers and Hens at the Emma Bridgewater Factory’ by Arthur Parkinson landed on my desk.

I didn’t really know what to expect from a book about a pottery garden but I was in for a delightful surprise as this is really a lovely and well-written story. Visitors to the factory are used to it opening its doors to enthusiasts who like to peek inside to see the traditional craftsmanship at work on the banks of the Caldon Canal however, what they might be unprepared for is the absolutely stunning walled garden bursting with nectar-rich flowers and hen houses of rare breed chickens. 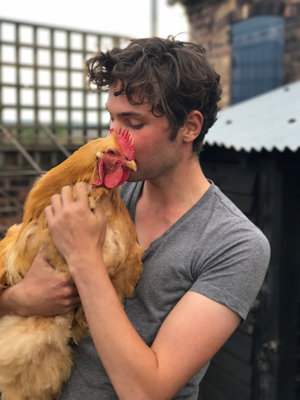 Arthur is the site’s gardener, florist and poultry keeper and his journey to the Emma Bridgewater Pottery, described in the first part of the book, is a lovely tale encompassing not only Emma Bridgewater herself but also the wonderful Deborah (Debo), late Dowager Duchess of Devonshire and Sarah Raven. Here he charts his childhood love of gardening and family influences and the part played in his discovery and love of hens by the late Dowager and how he came to be working at Sarah Raven’s Perch Hill during the summer once he had finished his studies at Kew. (pictured left: Arthur holding Christopher, his Buff Cochin.)

It was the chance gift of an Emma Bridgewater mug with a Perkin Bantam hen on it, while he was studying at Kew and missing his hens at home, that piqued his interest in the factory. He discovered that the hens on some of the pottery were drawn and painted by Emma’s husband Matthew Rice and this stimulated contact between Arthur and Matthew.

What I like about this book is that it is divided into four clear parts, the first covering Arthur’s background and his journey to the Emma Bridgewater factory, the second details the Emma Bridgewater garden itself, the third is full of hints about our own gardens and how we can attract bees, arrange flowers and keep poultry and finally in part four, Arthur covers seasonal plants and Jobs.

The factory garden itself has no surface that you can dig a spade into so Arthur uses raised flower beds. To me this is very interesting as many of us, as we get older, need to be able to garden without bending down. Seeing the nectar rich results of Arthur’s planting using this system is a tonic in itself and I think one of the important good-news stories in the book.

He has the joyous technique of being able to impart information in an informal and chatty way and his anecdotes are delicious. Because of his charming relaxed style you don’t realise how many tips you are actually picking up as you read through his stories, they are so interesting. He has taken his own photographs resulting in a really beautiful book. One can easily see from his photography how Emma Bridgewater, her designs and the garden, make such good companions and how the factory garden is home to some of the natural inspirations behind the earthenware that is produced there. 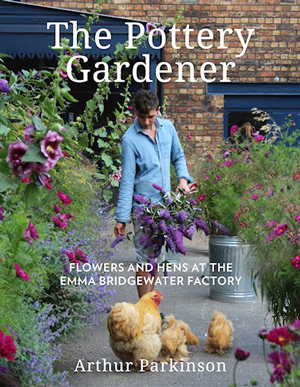 In the Foreward, Emma Bridgewater points to the fact that the book is bursting with ideas and facts, with love and dedication, and how she is charmed by Arthur’s  infectious and generous enthusiasm. She also refers to the women who have influenced him in his love of gardening and poultry keeping from his mother and grandmother to the late Dowager Duchess and Sarah Raven, whose vast talent has “clearly cast a deep and magical spell over Arthur“. She also refers to the part played by Matthew Rice, whose idea it was to create a garden at the factory.

Joanna Lumley comments on the book’s endpaper that “…Arthur’s love of living things is completely infectious and makes you want to go outside now to see what you can do in your own garden to make the world a lovelier place ….”

Arthur trained at the Royal Botanical Gardens at Kew before working for Sarah Raven at Perch Hill. His is now head gardener at the Emma Bridgewater Factory garden and has written for numerous special interest magazines and newsletters.

‘The Pottery Garden’ is a thoroughly lovely read, it is not only practical and informative but a positive inspiration for all who garden or wish to start gardening.

‘The Pottery Gardener: Flowers and Hens at the Emma Bridgewater Factory‘ by Arthur Parkinson is published in hardback by The History Press – www.thehistorypress.co.uk – at £25.00.

A review copy of this book has kindly been supplied by the publisher.