Houseplant of the month – December

Each month we feature a houseplant of the month courtesy of the Flower Council of Holland.

The houseplant of the month for December is the Phalaenopsis Orchid, an elegant and feminine plant with slender stems, shiny leaves and butterfly-like flowers.

Stemming from the Greek ‘Phalaina’ meaning ‘moth’ and ‘opsis’ meaning ‘’ike’, the Phalaenopsis flower resembles the fluttering wings of a moth, while possessing the beautiful colours of a butterfly.

Phalaenopsis have a range of colours from salmon pink to bold blue and having creatively speckled or banded patterns, the Orchid makes the perfect gift for a friend. 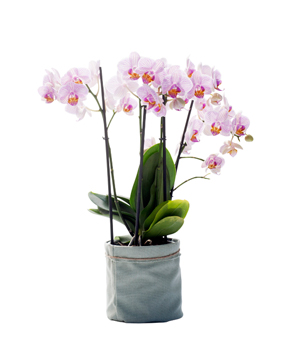 This luxurious orchid is used to travelling the world – discovered around 1700 in the tropical rainforests of Asia and Australia, it was brought to western culture by explorers who were captivated by its beautiful colours and patterns. The orchid grows naturally in trees or on rocks but is equally suited to your window sill or desk.

Looking after your Phalaenopsis

Keep the Orchid looking elegant for longer by positioning it with enough light to grow but avoiding bright sunlight between April and October. Submerge the pot once every seven to ten days in rain water for one minute. Add Orchid fertilizer to the soil once a month from November to February and twice a month for the rest of the year.

To help the plant to flower for a second time, cut the stem above the second eye (counted from the bottom) – then place the plant in a colour position and after approximately two months you can return the plant to its original position.

Not all Orchids are Phalaenopsis – there are also Cambria, Dendrobium, Oncidium and Vanda.