Houses of the Lake District 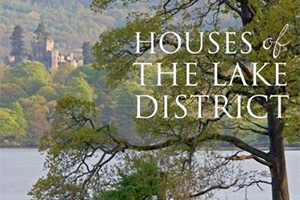 When one thinks of the Lake District the first impression is of glorious mountains, iconic lakes, hidden tarns and romantic scenery. The county of Cumbria certainly has plenty of iconic vistas to satisfy even the most discerning tourist.

However, Cumbria can also boast a fine stock of distinguished houses and castles and in his book about the county and its houses, ‘Houses of the Lake District’, Christopher Holliday, takes us on a special journey around 21 of these gems. The book tells the stories of the houses and the people who lived them, from the defensive Sizergh Castle (National Trust) with its 14th century pele tower to the wonderful Blackwell, the Arts and Crafts holiday home on the shores of Lake Windermere. As the author points out in the introduction, these are not the great houses of England, the seats of power of great landowners, they were not designed to dazzle like Blenheim or Chatsworth. On the contrary, Holliday explains that the houses within the pages of the book are of note not least because they are located in some of the most breathtaking scenery in England but also for many other reasons.

He charts how each house speaks of the comfort of the age in which it was built, of the social changes which often bypassed this part of the country and the effect of the county’s great literary history, where a house has become famous not so much for its architecture as for the writer or poet who lived in it.

The book is divided up into three groups, Historic Houses, Writers’ Houses and Victorian Houses. Many, such as Dalemain and Hutton-in-the-Forest, are still lived in by the same family after generations, and all are open to the public. The author focuses on the period that represents each house best but he also gives an interesting insight into how various architects’ contributed to the heritage of the county and how developments and events within the country in general beyond the Lake District affected individual properties. In some cases, periods of austerity enabled properties to be kept as if in ‘aspic’ which has resulted in an added bonus for the visitors of today.

When the railway came to Windermere in 1847, the influx of visitors to the area increased dramatically and there was a subsequent increase in the building of influential houses for mill owners, distillery families and textile magnets. These are best viewed around the shores of Windermere, such as in the wonderful Arts and Crafts house ‘Blackwell’ built between 1898-1900 as a holiday home for Sir Edward Holt, a Manchester brewer.

Holliday covers all the ‘gems’ of the county including Levens Hall, Townend, Dalemain, Holker Hall and Muncaster Castle. His literary houses include Hill Top, Rydal Mount and Dove Cottage among others. However, he does not neglect the smaller or perhaps lesser known houses and I was pleased to see he has included Wray Castle, Broad Leys and Armathwaite Hall in the book.

The photrography by Clive Boursnell is superb and we are treated to some fine illustrations of both the houses, their rooms and gardens.

The book is coffee table size and although perhaps too big to take out ‘on the road’, it makes an excellent companion for planning visits and learning something of the history and development of each house. I found myself absorbed from the very first pages and was pleased to find much new information about properties with which I was more than familiar.

‘Houses of the Lake District’ by Christopher Holliday, is published by Frances Lincoln at £30.00 in hardback.