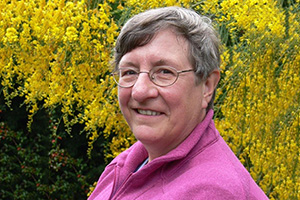 Sandy Felton talks to Christine Walkden about her love of gardening and her down to earth passion for plants and horticulture.

There is a phrase in computing called WYSIWYG – what you see is what you get – and I couldn’t help thinking that this was an appropriate phrase for Christine Walkden and in no small measure probably the reason for her big success on our television screens. Her boundless energy, enthusiasm and straight talking hits a chord with gardeners who are not interested in instant make-overs but who want to discover the simple pleasures that gardening can bring.

She is the One Show’s resident gardener, a plantswoman and horticulturalist of some 40 years experience, lecturer, tour leader, author, photographer and panel member on Gardeners’ Question Time. Her diary of engagements will show someone who is in demand across the length and breadth of the country as a guest speaker, appearing at flower shows and horticultural displays, garden openings and charity events.

Christine will be the first to tell you that she never imagined she would one day appear on television and admits that she was very surprised when Christine’s Garden, which ran on BBC2, became such a hit. For the girl who was given a crocus corm, a yogurt pot and some soil at junior school and for whom horticulture was not just an aspiration but a way of life, the fame of suddenly becoming something of a cult figure, was a bit much to take.

“Emotionally, it’s taken a long time,” she explains. “I am not a very gregarious out going person, really I am quite private and therefore having to deal with all the attention I get has taken quite a bit of effort, at first I spent a lot of time in tears.” She had in fact expected to be ridiculed and she certainly did not think the public would find her programme interesting. She has had to get used to the instant recognition, the demands on her time and appearing in front of a television camera.

This personal touch, her rootedness with the ground and her unfussy direct approach are some of the traits that people find fascinating and welcome. In many respects she reminds me of a female Percy Thrower, who puts the gardening first and foremost, speaking at a level that the average gardener can understand, like one neighbour to another.

For 20 years Christine lectured at Writtle College as an RHS Tutor and she has received an Honorary Doctorate for services to Horticulture from the University of Essex and an Honorary Fellowship from Myerscough College. In 2012 she won two awards from The Horticultural Channel for Best Gardening Television/Radio presenter and Best Gardening Newspaper/Magazine columnist. She is also a past winner of the Garden Writers’ Guild Radio Broadcasting Award.

Her favourite task in the garden is ‘tinkering’ and she likes nothing better than to wander around and see what’s there: “I love seeing things coming through the ground,” she says. “That first little bud or shoot of green and it doesn’t matter what it is, I always think, ‘oh great it’s alive’. The resurgence of life every year is fantastic.”

There is no hesitation when asked what her proudest achievement is – she loves teaching and is proud of all her students who have gone on to succeed in the profession: “My biggest achievement is inspiring other people to go on and do what I have done,” she says.

She now lives in Hertfordshire but it’s easy to detect the ‘Lancashire Lass’ in her demeanour, the ‘feet on the ground’ personality – a northerner! This is perhaps evident in her conviction that gardening is not painting a picture, its growing something which is going to develop, which gives pleasure and she clearly understands that people haven’t always got a great deal of money or space, which sadly sometimes television programmes tend to forget.

There is no particular favourite style of garden – Christine can get quite excited about an extremely well executed formal garden but it doesn’t really matter whether it’s formal or informal, it’s the execution of the standard of horticulture that really excites her, however she does have a favourite plant – Soldanella.

What most people might not know is that Christine leads garden tours across the world and seems to have a fairly catholic taste when it comes to individual countries. Reluctant to pick a favourite country, she goes so far as to say that she is passionate about the northern Italian Lakes because of the fantastic plantsmanship, amazing scenery and opulence of the gardens. She also likes the South of France and particularly Menton. However, she is happy to add the gardens of China, Japan and Mexico to her list but her one abiding ambition is to walk across Turkey starting in the west in March and finishing in September so that she can see the flora develop through the seasons.

So what about spare time, when she is not on radio or television, writing or lecturing: “Gardening! I like to listen to music, read a bit and love walking the dog but ultimately my life is horticulture.”

Christine is an active supporter of a number of charities including the Helen Rollason Cancer Charity – www.helenrollason.org.uk – and ‘Hearing Dogs’ a charity that trains dogs to alert people who are deaf – http://www.hearingdogs.org.uk

She is a patron of several organisations including the The Professional Gardener’s Guild Trust – www.pgg.org.uk and the Driftwood Fundraising Group, who open gardens in aid of Macmillan Cancer Support – www.driftwoodbysea.co.uk

Her latest book, published in February 2013, ‘No Nonsense Container Gardening’ follows on from several previous books including ‘No Nonsense Vegetable Gardening’ and ‘A year in Christine’s Garden – The Secret Diary of a Garden Lover’. She is a regular columnist in a number of gardening magazines and continues to lecture and inspire students, who like her, want to make their career in horticulture.

She has been made redundant in the past and knows what it’s like to have to hunt for work, but for the teenager who begged her headmaster at age 13 to send her to day-release to study horticulture, she knows better than anyone that horticulture can be a rewarding and life-long career. Despite all the set-backs the profession may present she has never lost faith with gardening and horticulture and that surely is the secret of her success.