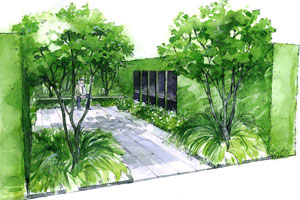 Matthew Keightley, Designer of the Help for Heroes garden at RHS Chelsea, talks to Reckless Gardener about his garden ‘Hope on the Horizon’ and the inspiration for his design.

The concept for a garden for charity Help for Heroes, had been swimming around in Matthew Keightley’s mind for some time. He realized that if he didn’t do something about it then it would never happen, so he picked up the ‘phone and explained his idea for a Chelsea garden to the charity and the rest, as we say, is history.

The charity is particularly close to Matthew’s heart – his brother Michael having served four tours to Afghanistan and due for his fifth  – and his overwhelming admiration for the work that Help for Heroes does to support our wounded servicemen and women.

“I explained to them that I had a concept for a garden which I felt would go really well at the Chelsea Flower Show,” explains Matthew. “The idea would be to re-site the garden afterwards and they loved the proposal.” Another major factor was the fact that Matthew would raise the sponsorship so the charity would not have to fund anything – an important consideration when every penny counts.

The sponsor, entrepreneur and philanthropist David Brownlow, through the David Brownlow Charitable Foundation, (Havisham Group)  – a charity committed to enhancing the lives and wellbeing of individuals – agreed to sponsor the garden and its transfer after the Show to Chavasse VC House, a Help for Heroes recovery centre near Colchester. Once re-sited the garden will offer a serene and peaceful haven for contemplation and support the challenging journey to recovery. 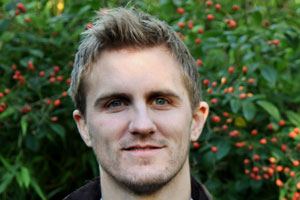 Mathew is an in-house designer for Farr & Roberts, a Maidenhead-based building and landscaping firm, who will carry out the construction work on the garden. He has never designed a garden for RHS Chelsea, in fact he has never designed a garden for a show before: “I was part of a build-up team for a show garden while I was at University but this is my first actual Show Garden”. He is undaunted by the prospects of building a garden at RHS Chelsea and is keen to get on site and get started. The Show will also be a debut appearance for Farr & Roberts who have delivered both residential and commercial projects since 1949, through the fusion of innovative and bespoke design, alongside traditional and experienced craftsmanship.

An accomplished designer, who began his landscape career at the age of 17 Matthew has plenty of experience under his belt. His international work includes garden consultations and designs in Paris, Cairo and Perth, Australia. His work in the UK has taken him from the modern urban spaces of Chelsea and Kensington to the expansive traditional gardens of Kent.

His planting for the Show garden will have sensory undertones: “We play on fragrances for the visually impaired and plants where a wheelchair can brush past”, he explains. “I aim to make the garden as tactile as possible so people can reach out and touch the planting.” He is using several varieties of grasses and cool, calming colours throughout, helping to emphasise the fact that it will be a serene, contemplative space where the soldiers can go to wind down and forget about the therapy they are going through.

“As a result of the rapid responses of our troops on the front line, many lives are saved and the road to recovery for our heroes begins,” explains Matthew. “This is a the journey that I will explore and attempt to reflect through my design for the garden; from the damaged and distressed beginnings to how they rebuild their lives and achieve strong and confident hope-filled futures. I want to represent all of those men and women who suffered injury or loss and who are looking positively to the future thanks to the help of the public.”

The layout of the garden is based on the shape of a Military Cross. Granite blocks will represent the soldiers’ physical wellbeing and the planting their psychological wellbeing,  at various stages of their rehabilitation. An avenue of hornbeams draws the attention through the entire garden to a sculpture resembling a hopeful horizon; a reminder to the soldiers that they all have a bright future ahead.

“Timing was lucky on my part,” explains Matthew. “The landscaping at Chavasse VC House has not started yet. I am actually designing the whole grounds and so I will fit the show garden into the overall design. The week Chelsea finishes we actually start on the landscaping project at Chavasse.”

In less than a week Matthew and his team will be on-site at RHS Chelsea and we wish them all a successful build-up. With the centenary of the outbreak of the First World War it is perhaps an apposite time for the charity to have a garden this year, serving to remind us that although wars eventually come to an end their effect on civilians and the servicemen and women involved in them, has far more lasting consequences.

You can find out more about the Help for Heroes charity on: http://www.helpforheroes.org.uk/