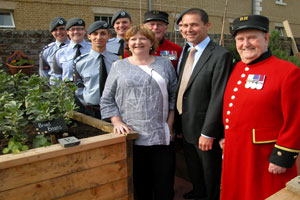 A charity that helps heal the invisible wounds of conflict with gardening therapy has launched a new campaign to tackle stigma around Armed Forces veterans with mental health issues. Gardening Leave launched its Honesty campaign, which uses the honesty seed head as an emblem, at its new-look horticultural therapy garden at the Royal Hospital Chelsea. (pictured left: Heather Budge-Reid with Phil Jones of ISS, air cadets and Chelsea Pensioners at the launch.)

The Gardening Leave garden at the hospital has been extensively refurbished over the winter by ISS Facility Services Landscaping. The garden now boasts bespoke raised beds, designed to make gardening easier for veterans with balance problems or in wheelchairs and a custom-build shed where therapists can work with veterans out of the rain.

With the new Honesty campaign, the charity wants to be able to show the veterans it works with, and others, that civilians are committed to them, and so will ask individuals to make a pledge to be honest about veterans’ mental health. 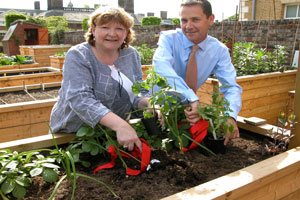 Heather Budge-Reid, chief executive of Gardening Leave, said: “Stigma can have a direct impact on a troubled veteran’s recovery, making them reluctant to seek help and becoming increasingly withdrawn. We need to understand the facts and reduce stigma by increasing civilian understanding of the issue and showing veterans they are understood by their community.

The campaign aims to ask individuals to understand four key facts: 1) that 20% of veterans suffer from some sort of mental health problem but this is very similar to levels in the general public, 2) stigma exists, 3) it is not only post-traumatic stress that is the problem and 4) for some, it’s not over when they get home. It can take 13-14 years of things getting worse before a veteran will go for help.

The charity wants as many people as possible to take the Honesty pledge, which can be found on their website at www.gardeningleave.org

Over 250 ISS staff have already signed the Honesty pledge. Managing Director, Phil Jones emphasized it is a cause they have very much signed up to and which had heightened awareness among the workforce of the problems our Armed Forces veterans face.

“Our support of Gardening Leave is a cause very close to our hearts”, said Mr Jones. “The refurbishment of the horticultural therapy garden at the Royal Chelsea Hospital will be the fourth walled garden project created in partnership with Gardening Leave and we are proud that our continued assistance will benefit our country’s veterans and help them on their road back to health and civilian life.  ISS staff have been at the forefront of our efforts, giving time and skills and working together to ensure that the various garden projects have been completed in time and fit for purpose.”

The new custom-built shed in the refurbished Gardening Leave garden is also supported by funding from BrandAlley. The firm donated the proceeds from the sale of plants in their 2013 RHS Chelsea Flower Show garden, designed by Paul Hervey-Brookes.

Credits: All Photographs are ©Gardening Leave