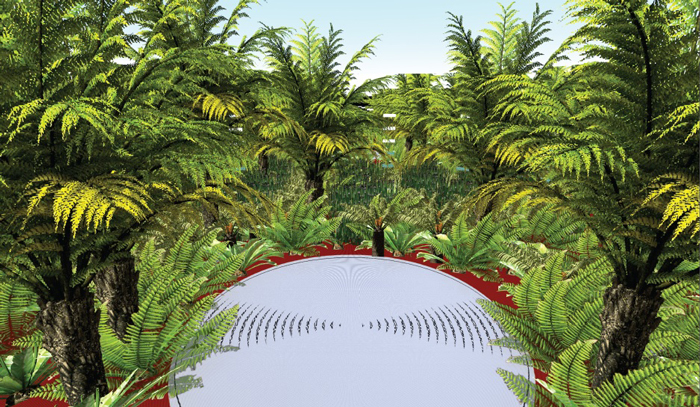 Plants that were the diet of reptilian giants roaming the earth more than 200 million years ago will make up the planting scheme of ‘The SMART Visiton Garden’ at this year’s (2015) RHS Hampton Court Palace Flower Show (30th June to 5th July).

Plants from both the Jurassic and Triassic periods, having survived mass extinction and vast climatic variations will be on display throughout the garden. Designer, Steve Smith, wanted to represent the resilience of nature across time and challenge those who live in fear for our fragile planet.

The garden is enclosed by a structure made of timber covered in hazard tape, with exposed frames and fittings on the exterior. The interior is mirrored and shaded by bushy ferns and all trees, creating the illusion of a much larger landscape.

Visitors cannot trespass on the garden but can only view it from the outside creating a sense of trepidation as to what may be found in the Jurassic world behind the barriers!

With the new film Jurassic World just released in cinemas, this garden is certain to create a talking point and is certainly very topical.

The garden will raise awareness that plants such as Dicksonia Antarctica and Dryopteris erythrosora can be grown in the UK and that visitors can take inspiration from the garden to create their very own prehistoric space, reminiscent of the Jurassic period. 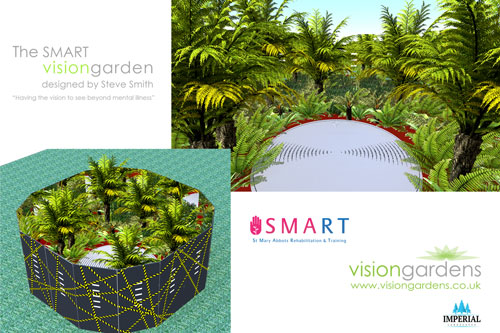 For the first time at an RHS Flower Show, ‘The SMART VISION GARDEN’ will feature the closest thing to a living fossil: Wollemia nobilis (Woolemi pine). This coniferous tree is the remaining member of an ancient genus dating back some 65-200 million years ago. Discovered in 1994 in the Blue Mountains of Australia, Wollemi pine has been hailed as the botanical find of the 20th century.

In reference to the garden, designer Steve Smith said: “I have used plants that evolved either in the Jurassic or Triassic periods, all of which have survived at least one major epoch and still survive today, in order to illustrate the capability of nature to flourish given the right opportunities and environment.”

The Jurassic element of this garden is of particular interest but the prominent meaning behind the garden should not be lost. The real message behind Steve’s creation is to encourage viewers to see beyond the prejudices that surround mental health and to think outside the box. The design promotes the core of the SMART projects philosophy which is to focus on good mental health rather than the limitations imposed by someone’s diagnoses. It seeks to represent the ability to break down the barriers created by boundaries across time, space and thinking and construct a fresh way to see beyond mental illness.

‘The SMART Vision Garden’ has been entered into the Conceptual Gardens category at the RHS Hampton Court Palace Flower Show 2015. This category offers designers the chance to push the boundaries of what defines a garden and they are encouraged to use maximum imagination and creativity.