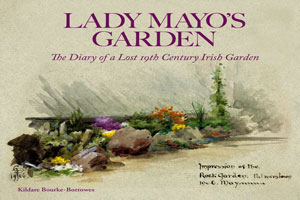 Ireland, has a fine gardening heritage and I often think that apart from a few iconic landscapes such as Mount Stewart and Powerscourt, the history of Irish gardens tends to be neglected.

In this respect, Kildare Bourke-Borrowes has redressed the balance somewhat with his book ‘Lady Mayo’s Garden’, – The Diary of a Lost 19th Century Irish Landscape – for within its pages we are treated to a unique historical account of an important garden which sadly like many others is no more.

Geraldine, Countess of Mayo, (pictured below, right) created an exquisite garden at Palmerstown House in Co. Kildare. She was 22 when she married Dermot, 7th Earl of Mayo, and for more than 30 years she worked tirelessly designing, planting and planning the walled garden at Palmerstown. However, what makes this story even more interesting is that Geraldine kept a careful record of her gardening life and through it we are given a glimpse of her labours, successes, failures, challenges and triumphs. 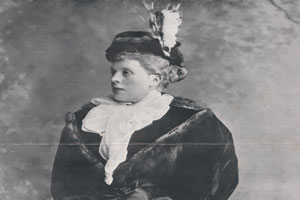 Her diary begins in January 1891 with the last entry being in 1922. A few months later the house was burnt to the ground by a mob. The diary obviously spans several pivotal moments in modern history, including World War One and its subsequent labour shortage and the author carefully illustrates the background behind Geraldine’s gardening story by placing her gardening life within this wider historical context and what was happening at the time.

In the preface to her garden book in 1891 she writes: “I have had this book for nearly two years and have never had the courage to begin it, tho’ I have known all the time that it would be a great pleasure to me, if once I could get over the obstacle of beginning something new!” So in January 1891, at the beginning of a new year she makes the effort, commenting that she sincerely hoped that in the years to come it maybe of interest to others.

We learn a little of her character through her garden book and share in her thoughts many of which are common to all gardeners: “I returned to Palmerstown on August 12th and found things very much gone to leaf, as there has been a frightful lot of rain. The Carnations are good – but nearly over – excepting the Duke of Wellington, which won’t be out for another three weeks.” (1892).

She developed a love for spring bulbs, probably because the family were not always there to enjoy the fruits of her labour during summer. In keeping with many families, who may well be titled but were far from what one could call wealthy, they rented out Palmerstown during the summer months. So for Geraldine, the spring was one season she could truly enjoy her garden and again when she returned in the autumn to savour the borders and late flowering bulbs. 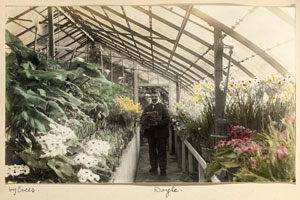 Her turnover of head gardeners seems quite rapid in her early years at Palmerstown, that is until she found Simon Doyle, (her fourth head gardener in two years) who was to stay as Head Gardener during the rest of the time Geraldine lived there, so obviously their ideas on gardening were in harmony. After the fire, when the house was rebuilt between 1926 and 1928 he continued at Head Gardener for the new occupants.

In 1896 she visited William Robinson at Gravetye Manor in Sussex. She liked wild areas in her own garden and was interested in Robinson’s revolutionary concepts, however, she didn’t embrace all his ideas and upon visiting Gravetye Manor that summer she realized why. She didn’t like a lot of wilderness inside the garden, preferring some formality, straight lines and topiary. She felt his garden was “too unordered, too confused”. For herself she found Robinson’s Arts & Crafts style of gardening rather ‘disappointing’ and as the author points out the garden she developed at Palmerstown was a “Robinsonian world, but a rather more ordered one than he advocated.” (Doyle, pictured left in glasshouse)

Both Geraldine and her husband became very involved in the Arts & Crafts movement and jointly founded the Irish Arts & Crafts Society in 1895. She was heavily committed to the Irish Industries Association, re-founded the Royal Irish School of Art Needlework and helped found and was a Director of Naas Carpet Factory.

Here we find another interesting facet to this book. We get the slightest peek into what life was like for a titled lady during this period – the house visits, holidays, daily routine – but most of all we share in her enjoyment of her garden. The little things that all gardeners experience from the weather to plant choice, the successes and the challenges, the varieties and cultivars of her garden, her passion and creativity.

This is a gorgeously visual book, with plates of watercolours drawn by both Lady Mayo and her father Gerald Ponsonby. Also included are photographs of the estate as it was, reproductions of old nursery and seed catalogues and invoices for orders, each perfectly encapsulating the period. Geraldine’s paintings have a particular charm. 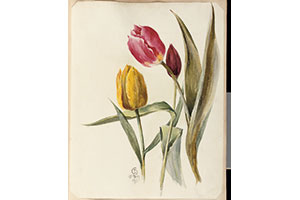 It is rare for such a diary to still exist and given that Lady Mayo lost all her possessions in the fire, the fact that it survived is a miracle. Fortunately, the author, a cousin of Lady Mayo, was able to unearth it and bring to light this extraordinary story of a gardener’s passion. As Kildare Bourke-Borrowes points out in the Introduction, there were over 2,000 big houses in Ireland in 1919, many of them with walled gardens but by the 1990’s all this had changed. Some have disappeared altogether, others have been left to fall into disrepair, others changed beyond all recognition. The value of Lady Mayo’s diary will certainly come into its own if ever, in the future, it is decided to revive the garden as has happened so successfully at Heligan in Cornwall and Kylemore Abbey in Connemara.

In the meantime, we the reader, are able to share Geraldine Mayo’s passion and reflections thanks to Kildare Bourke-Borrowes. Kildare is a writer and a gardener, whose passions for gardens and their creation developed when he lived for ten years in the South Cottage at Vita Sackville-West’s Sissinghurst Castle. He has a large garden in Oxfordshire and knows all about the huge joys and despairs of gardening,  so often mentioned by Geraldine in her garden book. He has made full use of the family archives in the editing of  ‘Lady Mayo’s Garden’ and the result is a fascinating and absorbing read.

‘Lady Mayo’s Garden’ – The Diary of a Lost 19th Century Irish Landscape – by Kildare Bourke-Borrowes, is published by Double-Barrelled Books, in hardback at £25.00.

©All photographs copyright of the author and Charles Bourke, Earl of Mayo.