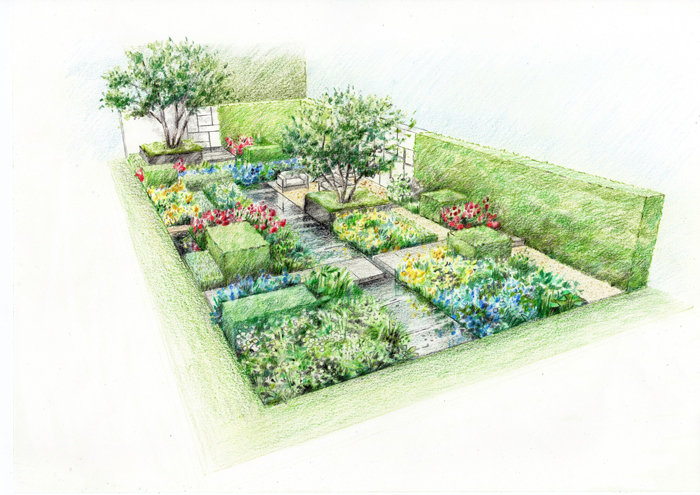 The first time I saw Marcus Barnett’s work was at Chelsea in 2005 when he and Philip Nixon joined forces to design their first garden for the prestigious show. I instantly fell in love with that garden – a contemporary design utilising modern materials, tapping into a current trend for exterior artworks. ‘The Gallery Outside’ displayed photographs by Lord Lichfield and, not surprisingly, it was awarded a Gold.

The achievement of an RHS Gold Medal at Chelsea came only a year after Marcus graduated from the Inchbald School of Design in 2004. Since then, he has gone on to design a show garden for Savills 2006 and 2007 (again with Philip Nixon) winning another Gold and Silver-Gilt. He returned to Chelsea in 2011 to design a garden which was subsequently re-located to Kew and I remember as particularly memorable for its abstract honeycomb pavilion.

At the 2015 RHS Chelsea Flower Show all eyes will be on him again when he designs The Telegraph Garden.

His design for Chelsea 2015 for The Telegraph takes inspiration from the landscape of his childhood and its rolling English countryside. He turns to 20th century Dutch artist Piet Mondrian, the pioneering abstract painter and member of the De Stijl Movement, for the garden’s influence.

The garden will reflect strong rectilinear geometry with coloured blocks contributing colour and textural relief, whether viewing from within or when viewed from above. 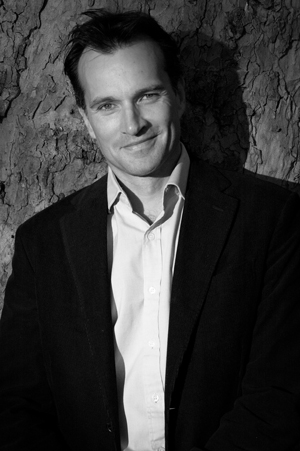 Marcus stands out among his international rivals for creating gardens which feel particularly personal to the client. He is known for his classic, contemporary style, in which bold, abstract geometry, clean lines and modern materials combine with clipped evergreen shapes and the softening influence of grasses and perennials.

For Marcus, landscape and garden design represents a complete career change. Before becoming a prize-winning graduate of the Inchbald he had spent several years in the army, including command of an independent platoon on airborne operations in Northern Ireland. He then went on to be appointed as Equerry to HRH The Duke of Kent KG before choosing to leave the army in 1997.

In 2000 he provided command, control and communications support at the Sydney Olympic Games. However, eventually, his deep-seated love of landscape and gardens prevailed and he enrolled at the Inchbald School of Design.

He admits that it was the influences of his childhood spent exploring the forests and fields around his home as well as his interest in modernist architecture that finally set the seal on his future career.

He set up his London practice in 2004 – www.marcusbarnett.com – with the practice working on projects both in the UK and Europe but increasingly further afield.

In 2011 “House & Garden” magazine named him as one of the rising stars of the garden design world.

Whether working in an urban courtyard or the gardens of a large country house, Marcus and his team perform a form of alchemy – skillfully fusing the landscape with the client’s vision to create exquisite and deceptively simple results.

Marcus has also been asked by Scott’s restaurant, in Mayfair, to transform its Terrace in the weeks leading up to and over the Chelsea Flower Show. Marcus and his team will be swathing the Terrace in wild flowers – creating the opportunity for customers to prolong the experiences of Chelsea over some seafood and a glass or two of Champagne.

Marcus comments: “The Daily Telegraph is the only exhibitor to have been awarded the top prize of ‘Best Show Garden’ at Chelsea three years consecutively, so it is a huge honour to be asked to create The Telegraph Garden. The design will be bold, with a striking planting palette underpinned by a strong, rectilinear framework. I hope the RHS judges will be as excited as me to see it come to life.”

The Telegraph Garden will once again occupy a prime site on the Main Avenue at Show (MA19).