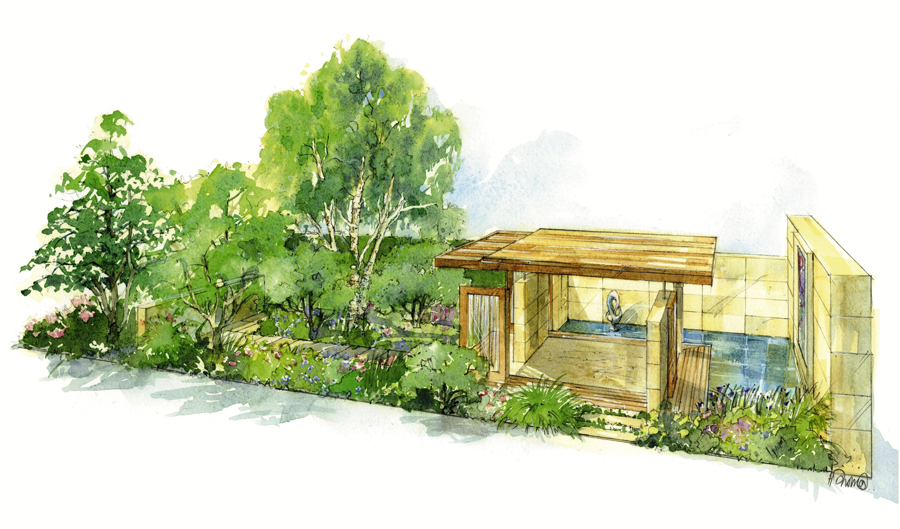 The 2018 RHS Chelsea Flower Show will once again see designer, Chris Beardshaw, collaborate with Morgan Stanley to create ‘The Morgan Stanley Garden for the NSPCC‘. The 2018 Show also marks Chris’ 20th anniversary exhibiting show gardens. The 2018 garden will reflect Morgan Stanley’s longstanding commitment to the wellbeing of children and aims to raise awareness of the Firm’s current charity partner, the NSPCC.

Chris started the design process of the 2018 garden in July this year when he visited the NSPCC to meet some of its practitioners and learn more about the diverse range of work and day to day challenges the charity faces in its fight for every childhood. The design will provide a metaphor for the emotional transformation that takes place in a child as they experience the positive impact of the NSPCC’s work. 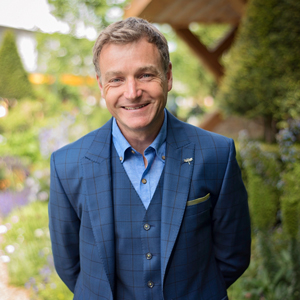 At the start of the garden, the direction of the path is unclear, then moves through a sheltered and densely planted woodland space, filled with a variety of shrubs, including a selection of acid loving rhododendrons and azaleas, shaded by the canopy of large specimen trees. The path reaches a corner, turns and reveals a more open and tranquil space, planted with soft textured perennials in velvety shades of blues, pinks and purples. The path finally steps up to a cedar wood pavilion, which is enclosed at the rear by a calm and reflective pool.

Chris (pictured left) has designed the pavilion, which will feature a series of moveable screens which can be closed to create greater privacy and to offer differing vistas of the garden.

Commenting on the design Chris said: “It is a privilege to be working with Morgan Stanley again at Chelsea and to be able to create a garden with such a strong and important narrative. It was extremely humbling to visit the NSPCC and to learn more about their incredibly challenging and broad ranging work with children. We want to raise awareness for the charity with a garden that is intrinsically a beautiful, healing and restorative space and which celebrates how a garden can make us feel.”

The NSPCC partnership with Morgan Stanley, which began in February 2017, will see the firm and employees raise a total of £1 million for the charity, to develop and improve services for children who have suffered abuse and provide support for their families.

CEO of Morgan Stanley International, Robert Rooney, comments that the Firm has a longstanding commitment to the wellbeing of children and is proud that their show garden will raise awareness of the important work of the NSPCC: “We’re also pleased to be working with Chris Beardsahw, who has once again designed not only a beautiful show garden, but a garden which has a truly important narrative,” he said.

NSPCC Chief Executive, Peter Wanless points out that the NSPCC works to ensure those who have suffered from abuse and neglect can recover and rebuild their lives: “Chris’ design provides a representation of the journey young people take with us. We’re excited that visitors to RHS Chelsea Flower Show will experience and connect with the garden, which in turn will give them a better understanding of the vital work we do on a daily basis at the NSPCC,” he said.

Chris is a renowned plantsman, designer and broadcaster, involved with a wide range of horticultural projects and educational initiatives. He is currently a regular panellist on Radio 4’s Gardeners’ Question Time and seen on BBC’s weekly Beechgrove Garden from April to October. At the 2017 RHS Chelsea Flower Show, the Morgan Stanley garden, designed by Chris, won the BBC People’s Choice Award. He has been dubbed a modern day ‘renaissance man’ in all matters horticultural. For further information on Chris’ latest projects please visit: www.chrisbeardshaw.com – www.facebook.com/ChrisbeardshawGardenDesign – Twitter: @chrisbeardshaw

For information and progress on the Morgan Stanley Garden for the NSPCC please visit:
www.morganstanley.com/chelseaflowershow