Penshurst Place – the home of ‘Arcadia’ 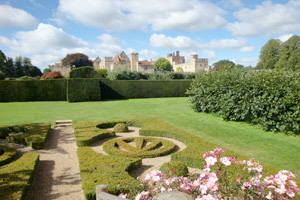 Penshurst Place is one of England’s oldest family homes and its mellow walls and distinctive towers have touched every aspect of the rich tapestry of England’s history. As you enter the estate and see the beautiful Tudor brick house you immediately feel the touch of seven centuries of ownership.

The house is one of the best-preserved examples of a defended manor house in England and in the formal gardens we find a superb example of Elizabethan garden design. This delightful and beautiful Kent estate has passed through the hands of royalty and nobles down through the centuries, each of whom left their own distinct marks in the passage of time. However, one family, the influential Sidney family – have owned Penshurst Place since it was gifted to Sir William Sidney in 1552 by Edward VI.

The Sidney tenure during the past four centuries has ensured that Penshurst Place has maintained a quite remarkable quality and through their custodianship the ‘jewel in the crown’ – Penshurst’s formal gardens – can be enjoyed today by the thousands who visit.

To walk in Penshurst’s gardens you walk with history. Treading over the same ground that Henry VIII walked while he stayed at Penshurst during his pursuit of Anne Boelyn, of Queen Elizabeth I, who enjoyed the hospitality at Penshurst on numerous occasions and of the great poet and soldier, Sir Philip Sidney whose family home it was and who introduced the tastes of the Italian Renaissance to the garden long before it became fashionable in England.

When that same Sir Philip Sidney wrote for his sister the prose romance ‘Arcadia’, a word we have come to associate with the unique aspects of the English landscape movement, he based his prose on Penshurst. Arcadia it certainly is, for Penshurst Place sits in a delightful landscape of parkland and woods. 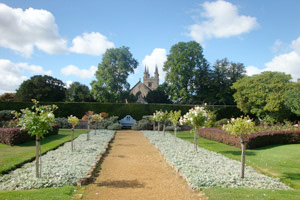 Garden records here date back to 1346 and while each succeeding generation has brought their own changes – all gardens must evolve – there has been no dramatic lurch in favour of a current fashion of the time. Fortunately, during the period when the landscape movement was sweeping away many of England’s great formal gardens, lack of money at Penshurst Place prevented this. Thus, 21st century visitors can still see many of the developments that Sir Henry Sidney, (William’s son) achieved over 400 years ago. The walling of the orchard for example, the framework of which remains today.

The Civil War obviously created a lot of problems for land owning families but after the restoration of Charles II, many families were able to look to their gardens and parkland once more. Charles II’s enthusiasm for gardening on a large scale influenced many – as a result we see the formalisation of the Parkland evolving at Penshurst Place at this time and the creation of the lovely Lime Walk by Philip Sidney, 3rd Earl of Leicester.

During the first quarter of the 17th century, the gardens at Penshurst Place had started to develop into the form we see today. However, by the late 18th century, Penshurst Place suffered a period of neglect and it was to fall to John Shelley Sidney to bring the gardens back to life which he did with commendable efficiency.

The real renaissance of the garden, however, stems from the work of Philip, 1st Lord De L’Isle and Dudley, and his head gardener Mr Bridger, who came to the garden in 1820 and stayed for 48 years!

The 2nd Lord De L’Isle and Dudley emphasised the Italian influence in the garden, but in a very subtle manner. Statuary and ornaments are introduced at this time and the oval lily pool with its classical statue and fountains was perfectly in keeping with the restored layout of the Italian Garden. 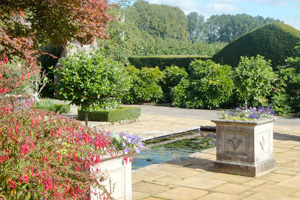 The kitchen garden was reduced in size – at one time it occupied half the entire garden within the walls – thus enabling new enclosures and the opportunity to offer an abundance of variety in form, foliage and bloom continually from spring to autumn.

That process of improvement goes on – currently there is a two year project to restore and redesign the 72 metre double herbaceous borders and Chelsea Gold Medallist George Carter is carrying out some hard landscaping in the garden.

To walk through the garden, divided by its magnificent yew hedges, is to savour a very special place. There is space in the little garden rooms for contemplation – a quiet niche to sit, a vista to ponder upon.

There is a viewing platform so you can look over the Union Flag Garden – laid out as a Union Jack – but it also serves as an excellent vantage point giving a lovely view of the house. Stroll through the Rose Garden, The Stage Garden and Grey Garden before taking a seat in the Italian Garden so you can just soak in the special atmosphere. Perhaps linger by the Lanning Roper border or set off again to discover the Orchard and Trellis and the Nut Garden. The Heraldic garden, with its distinctive heraldic posts, was one of my favourite areas and with the backdrop of the castle beyond seemed to encapsulate all that is Penshurst Place.

Today, Philip, 2nd Viscount De L’Isle and his wife Isobel continue the process of sustainable development in the gardens as well as the historic parkland. Ponds and gardens have been restored and the water supply from the lake in the parkland improved. For them the garden should always be fresh and surprising and I certainly found that.

The Garden Tea Room was excellent for a very good cup of tea and light snack and I found the staff and room stewards welcoming and helpful. Groups can be accommodated at Penshurst Place for which there is a superb fine-dining package available.

Penshurst Place is a uniquely romantic setting and the perfect place for weddings. The magnificent Baron’s Hall or the more intimate Sunderland Room are both available for weddings, both of which will delight guests as they enter. For more information about Weddings at Penshurst Place log onto: www.weddingsatpenshurstplace.com

Penshurst Place and Gardens is situated at Penshurst, Tonbridge, Kent. Information about the house and garden can by found by logging onto www.penshurstplace.com

Information for groups can be obtained from the Head of Visitor Services – email groups@penshurstplace.com

A very special visit and one which will remain in the memory for a long time to come.