Sissinghurst – an intimate and mellow garden 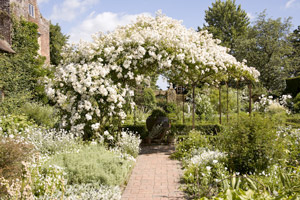 All great gardens are the product of the love and affection showered on them by their designers and owners. Sissinghurst Castle’s garden is no exception – here is a fine example of a Kent garden which sits comfortably in its surroundings. Promising and delivering the classic and the romantic – a living testament to the lives of two fascinating people.

To know something of Sir Harold Nicholson and Vita Sackville-West before you visit Sissinghurst makes the visit all the more romantic and somehow helps you get the feel of this great garden as soon as you step through the courtyard. Here is one of the iconic gardens of the world, perhaps the most famous garden in England and certainly one that every gardener should experience at some point in their lives.

Harold, writer and diplomat and Vita, poet, novelist and gardener, loved Sissinghurst passionately. Harold was the planner who brought order, form and classical elegance, a framework within which Vita, the planter, who wanted exaggeration and to cram plants into every available space, found discipline.

view-across-orchard.jpgNigel Nicholson’s ‘Vita & Harold’ – The Letters of Vita Sackville-West and Harold Nicholson 1910-1962) – published by Phoenix – helps the reader gain a special insight into their complicated lives. The letters also help us understand not only their complex relationship but also some of their thoughts and worries about Sissinghurst. Writing to Vita in October 1948, Harold comments: “Sissinghurst has a quality of mellowness, of retirement, of unflaunting dignity which is just what we wanted to achieve.”

When Harold and Vita bought Sissinghurst they took on a run down, neglected estate surrounding what was once a medieval manor house sitting within a moat – in effect, as the National Trust (N.T.) guidebook points out, they wanted ‘to take a ruin and make it flower’.

A good starting point for visitors is to climb the Elizabethan tower from the top of which you get a wonderful view of the estate. It was in this tower that Vita spent her days writing, in here a refuge from the world, surrounded by the private space of her developing garden.

Once through the tower archway you come to the lower courtyard with the White Garden to the left and the Rose Garden to the right. The White Garden (probably only rivaled by the red border at Hidcote) was one of the last gardens at Sissinghurst to receive an identity. Until the winter of 1949-50 it had been filled with roses but they had outgrown their space and so the White Garden became the climax for Harold and Vita’s labour of love and vision at Sissinghurst. Vita was entranced by white flowers and although I visited the garden at the end of the season, I was still ‘blown away’ by the special intimacy of this part of the garden.

The Rose Garden beckons with its old rose varieties, the high walls festooned with honeysuckle, figs and vines. Then into The Lime Walk exuding a classical order – also known as The Spring Garden this is one area of Sissinghurst where Harold controlled not only the design but also the planting.

Next you come into the Cottage Garden or Hot Garden as it was referred to by one of the staff and for me the high-point of the garden. The wonderful colour of the deep oranges, reds and yellows shout out at you against their backdrop of the South Cottage. Once again there is something intimate about this space which the National Trust, Sissinghurst’s custodians, takes great care to maintain. It is jam-packed with every shade with the hot colours giving one a warm and pleasant feel – magnificent.

The Orchard, Nuttery, Moat Walk, Herb Garden and Purple Border are still to come as well as visiting the Library, so Sissinghurst is not a property visited in a few hours, there is much to see, much to enjoy.

Gardens evolve, they do not stand still nor should they be kept in a time warp. At Sissinghurst the N.T. have done a fine job in maintaining the vision and essence of the garden while at the same time replacing dead or worn out trees and plants, remaking and creating changes in parts of the garden which did not work. One such area is the Delos, which has been transformed from a Mediterranean garden to a ‘woodland carpet’ which during the spring is now as dazzlingly beautiful as any garden at Sissinghurst.

From the Delos you can see the Priest’s House. This detached property, formerly the banquesting house of the Elizabethan garden, is Sissinghurst’s newly opened Holiday Cottage. The main bedroom of this sumptuous detached house looks out over the world-famous White Garden. To find out how you can go about staying there visit the website: http://www.nationaltrustholidays.org.uk/holiday-cottage/priest-s-house-cranbrook-kent/

There is also the fully refurbished Sissinghurst Castle Farmhouse B&B on the estate. For visitors to Kent who wish to enjoy the gardens often, both properties offer themselves as perfect bases.

Sissinghurst has been blessed with a number of talented gardeners including Jack Vass, the head gardener who came to work for Vita and Harold in 1939 and stayed until 1957. After a number of stopgap gardeners, Pam Schwerdt and Sibylle Kreutzberger finally arrived at the garden in 1959 who remained joint head gardeners until 1990.

In 1991 Sarah Cook took over the garden followed by present Head Gardener Alexis Datta in 2004. All have brought their particular talents to this special place while at the same time ensuring that the general feel and atmosphere of Sissinghurst was also maintained.

I asked the Assistant Head Gardener, Wendy Tremenheere what she loved most about Sissinghurst: “Autumn is my favourite time of the year because the garden has been building up to its finale. With colour from the Dahlias, Salvias, Anemones and Asters in full bloom and the trees and shrubs just starting to turn, the picture is complete.”

Sissinghurst is something more than the quintessential English garden sitting in the Kent Weald. Its walls and buildings have absorbed the history of centuries. The Tower – originally built as a gateway into a massive courtyard – dominates all parts of the garden and estate and it takes little imagination to cast the mind back to the Elizabethan house which once sat in this landscape.

The Renaissance, the Civil War, use as a prison for French prisoners of war and even the parish poorhouse, which was set up in the stables, have seen Sissinghurst in many guises. One cannot help but be touched by such a place and no doubt that sense of history and charm etched itself on Vita and Harold when they took the big step to buy Sissinghurst, by then in a sorry broken down state, in 1930.

Today, Sissinghurst is one of the N.T’s most popular gardens. They have carefully negotiated the line between what is and what might be. The new vegetable garden and Sissinghurst farm project are fine examples of what might be. The Granary Restaurant serves over 100,000 people a year and this prompted the N.T., with Adam Nicolson’s support, to grow the food for the restaurant on the farm. Not only is this good for the landscape but also for the sense of vitality it brings to Sissinghurst.

Gardens in themselves are always beautiful in one form or another but the truly great gardens have that magical extra – a sense of place, time and romance that no person can manufacture. As they well knew, Sissinghurst had all the romance and allure that would enable Harold and Vita to create something special and it is to their enduring credit that they could overlook the shambles that greeted them in that spring of 1930 and hold the vision of what could be.

Despite the dullness of the day, Sissinghurst was one of the most enjoyable garden visits I have ever made, in the height of summer and in sunshine it must be even more magical. There is a lot to learn and understand in Harold and Vita’s garden, the old and new, the private and public but most of all the classical and romantic.

Sissinghurst, Biddenden Road, is near Cranbrook, Kent TN17 2AB. You can find out more information by Telephoning: 01580 710701 (Infoline) or logging onto – www.nationaltrust.org.uk. The garden is open from March to October – the estate remains open all year.

Caption Credit: The White Garden is ©NTPL/pennytweedie
All other pictures are © Reckless Gardener