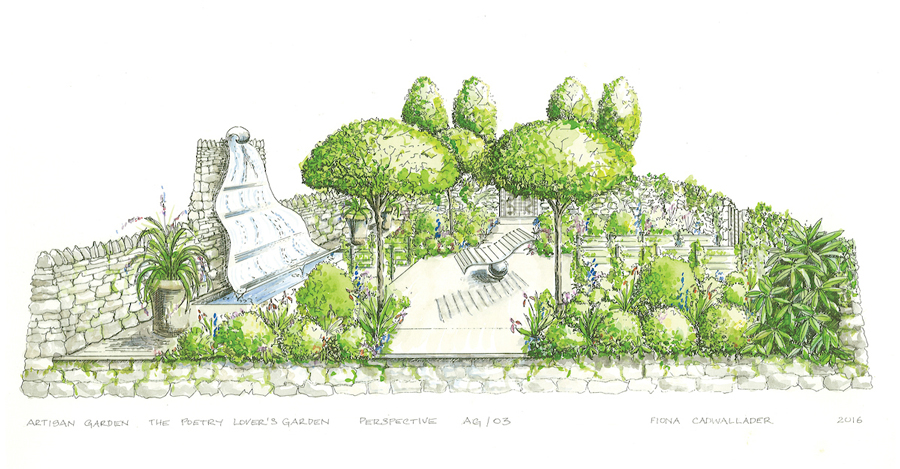 Garden and interior specialist Fiona Cadwallader will make her RHS Chelsea Flower Show debut in 2017 with her ‘Poetry Lovers Garden‘ in the Artisan category.

While gardens in the ‘Artisan’ category are quite often traditional, Fiona points out that the Poetry Lovers Garden, though having certain historic literary aspirations and references, will also contain some striking modern elements such as a stainless steel water feature and curvaceous chaise. Both have been designed by Fiona.

The starting point for Fiona’s design is the Samuel Taylor Coleridge’s poem ‘This Lime Tree Bower my Prison‘. The beautiful sentiment expressed by the poem echoes Fiona’s own belief that one can find natural wonders everywhere if only one has an appreciation for nature.

In the poem, Coleridge alludes to the time when injury prevented him from enjoying the countryside and the little lime tree bower in which he has to sit, becomes a kind of prison. By the end of the poem, however, he no longer sees himself as a prisoner but able to enjoy the nature of his surroundings.

Fiona’s design references the colour and light effects evoked in the poem with planting consisting of lime, yellow, dark green, blue, purple and black. Four beautiful specimen Tilia x euchlora will not disappoint. This particular variety of lime is also known as the Caucasian or Crimean lime. It is under such foliage that Coleridge was sitting when he described the feeling of summer. Other notable plants will include Amsonia tabaernaemontana var. salicifolia much loved by the designer for the star shaped clusters of tiny pale blue flowers.

Fiona will also incorporate Anchusa azurea ‘Loddon Royalist’, no stranger to the Chelsea stage being a brilliant herbaceous plant and member of the borage family. With its deep blue flowers, evocative of the sea Coleridge imagines his friends seeing on their coastal walk without him.

Alchemilla conjuncta is the perfect edging plant while Geranium ‘Mrs Kendall Clark’ with its cut leaves and sprawling habit will spill over the steps in keeping with the informal planting style which softens the symmetry of the layout.

The design is for a client who wants a tranquil retreat on returning home from work and likes to sit outside reading poetry to the sound of moving water. The stainless steel fountain, lit by fibre optics, alludes to the waterfall in the poem and provides contrasting sparkle. Polished concrete will represent ease, modernity and reflection. Ivy-clad stone walls evoke the Quantock Hills to provide a measure of seclusion.

Fiona personally selected the trees for the garden from Van den Berk in Eindhoven, Holland and Chelsea veteran Dave Root of Kelways in Somerset is sourcing and growing shrubs and herbaceous plant material. Mark Gregory’s Landform are the contrators.

Fiona is a designer and artist specializing in gardens and domestic interiors. She studied at The English Gardening School and opens her garden to the public as part of the National Gardens Scheme. She has a specific interest in historic gardens.

We look forward to seeing this lovely design at the 2017 RHS Chelsea Flower Show and wish Fiona and her team every success during build-up.