Quarry Garden to be largest at Chatsworth Show

The largest show garden at the first ever RHS Chatsworth Flower Show celebrates the centenary of the Institute of Quarrying (IQ) and will combine impressive stone features with colourful horticultural displays.

Designed by award-winning designer Paul Hervey-Brookes, the garden will reflect the brave new world of quarrying. As well as representing a celebration of the IQ’s centenary year, the Quarry Garden also aims to engage and inform the general public about the nature of quarrying in the UK and internationally and its relationship with local communities and ecosystems.

The garden features stunning rock pieces, such as the 2.5 metre high, 17 metre long cut stone vertical rill that forms an outer boundary to the garden. This is softened by the wealth of planting that includes species commonly associated with the natural recolonisation of old quarry sites.

Dr Miles Watkins, President, IQ, explains that 100 years ago a group of four quarries laid the foundations for setting standards of professional development in the minerals extractives sector: “Today, we’re celebrating their vision with our own 21st century iteration of what quarrying means to us today,” he said. “The extractive industries continue to contribute a major part of the Derbyshire and East Midlands economies. The Quarry Garden is a celebration of this significant contribution and where better to root it than at Chatsworth,” he continued. 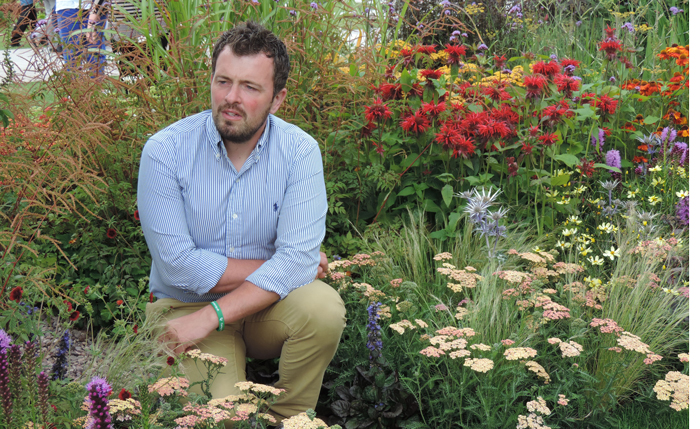 For designer Paul, (pictured above) the work on this project has been a fantastic journey: “My work as a garden and landscape designer is highly diverse and it has been an exciting new challenge to create something that both commemorates IQ’s centenary year and demonstrates the importance of quarrying within our natural world,” he said.

Paul has built a strong reputation for landscapes and gardens that are classically English relying on planting schemes to create spaces and rich, multi-layed habitats. His plant focused philosophy is rooted in his early training at the Royal Botanic Garden, Edinburgh and subsequent garden experiences. Described by his peers as being arty, creative and possessing an immense plant knowledge, his ability to read landscapes and evoke intense feelings and emotions, has won him acclaim both in the UK and Internationally.

For updates on social media, follow the #QuarryGarden hashtag.