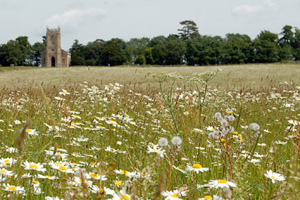 The National Trust’s ten year restoration of Croome Park, in Worcestershire, is an inspirational and exciting project. Croome has a unique place in gardening history for it was here that Lancelot ‘Capability’ Brown completed his first commission as an independent designer and pioneered the English Landscape Style of gardening.

What is also inspirational is the fact that if the National Trust had not purchased the park in 1996 with the support of the Heritage Lottery Fund and a generous donation from Royal SunAlliance, this unique landscape may have been lost to the Nation for ever. The 6th Earl of Coventry commissioned Brown to work on his residence and grounds at Croome in 1751. It was something of a baptism by fire as Brown was not only designer but landscaper, engineer and architect all at the same time. It is also interesting to ponder why the 6th Earl took the risk of employing Brown for this substantial commission for despite Brown’s reputation for his work at Stowe (where he added many of his own ideas to the themes introduced by William Kent) he had no notable portfolio of independent work.

It was an inspired choice for the work which Brown carried out at Croome was to establish his reputation for English Landscape design and start a whole new fashion – the landscape as a work of art.

The land at Croome was boggy and from this rather unpromising foundation his vision of a sweeping landscape saw the creation of an immense ornamental river and lake and the planting of thousands of trees, shrubs and flowers. Within the Pleasure Grounds he worked with Robert Adam to create the classical buildings so important to the overall views and effect. (James Wyatt was later to complete Croome’s parkland buildings and new designs.)

Croome became the envy of the English aristocracy and landed gentry and Brown was to continue to be associated with the Estate and its development for the rest of his life, in fact he died in 1783 on his way back from visiting the 6th Earl at his London residence. The two men had become close friends and the Earl erected a fine monument to Brown overlooking the beautiful landscape which he had created, which has been restored and can be seen at Croome today.

By the 1990s the Park had fallen into a poor state of repair. Many of Brown’s original trees and shrubs had disappeared, statues and follies vandalised and the artificial lake and river had silted up. The original pathways had disappeared under tangles of weeds and scrub. 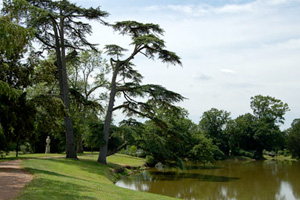 Restoration was not going to be an easy matter and not something which could be achieved overnight. Thus started the ten year project to carefully reflect Brown’s original vision. Not only had the landscape to be restored, but also the grottos, statues and follies designed to draw the magnificent views out to the wider natural landscape. The National Trust team at Croome are fortunate in having excellent records reflecting the design and management of the Croome estate and were able to use global positioning to ensure historical accuracy for the planting of 45,000 trees and shrubs.

Two miles of historic paths have been reinstated, enabling visitors to walk to the church (a dynamic focal point sitting on top of a hill), the Pleasure Grounds, around the lake and through the shubbery out into the wider parkland.

The lake was drained and 50,000 cubic metres of silt removed (this was later spread over arable farmland and used to help restore the native wild flower meadows). More than 5 acres of wetlands have been created – these act as a natural filter to improve the quality of the water entering the lake and river and have also recreated the ‘swamp’ habitats removed as a result of the restoration.

All the buildings and statues have been restored and returned to their original locations and one of the most striking features at Croome is the 400 acres of arable land which have been returned to English wild flower meadow.

On the day of our visit the wild flower meadows were stunning and as we toured the estate with Property Manager, Michael Smith – whose enthusiasm and energy for the project is infectious – we became as excited and delighted as he and his team to be able to enjoy such a beautiful landscape.

As you leave the church that landscape is encapsulated within the frame of the door and it is pure Jane Austen. Around every corner there is a little surprise, a folly here a statue there, a delicious old rose to tempt you down the Wild Walk, or the anticipation of a change in the vista as you round a bend.

Michael explained that by the end of the 18th century Croome was home to an enormous plant collection both exotic and annual and was second probably only to Kew. “This amazing restoration project enables visitors to get a feel for Croome Park as ‘Capability’ Brown intended it to be” explains Michael. “Croome was Brown’s first landscape commission and it established a revolutionary vision of ‘an English landscape garden’. We have been fortunate to have many of Brown’s original plans to work from which helped guide us and ensure the restoration is historically correct.”

The team are also grateful for the role played by the volunteers who help on the estate. Volunteers like Ted Rice who come every day to help on the estate and who admits that it is hard not to have a passion for Croome. Volunteers cleared tons of rubble and brambles, have helped with planting and mulching and much more. “There is an opportunity for everyone that wants to be involved,” explains Ted.

Certainly it is clear that Mike and his team share the belief that Croome is a very special place and that it is a privilege to work there.

The parkland at Croome is also very important for wildlife and is rated as the 6th most significant site in the UK for beetles associated with decaying-wood habitats. The National Trust have created three new wetlands as well as the wild flower meadows re-created in the parkland.

During the next few years restoration work will start on the Ice House, the restoration of the waterways and smaller ponds and rebuilding the 18th century Ha-Ha. The reinstatement of pathways around the wider parkland and the continuation of planting to include the woodlands, groves and shelter-belts will continue. There are also plans for a new visitor reception in the former RAF buildings adjacent to the car park.

We wish Mike and his team well for the future of this imaginative and special restoration project.