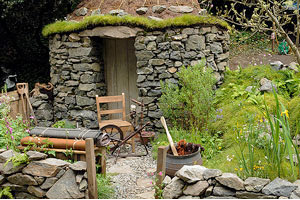 Celebrating 100 years of the Royal Horticultural Society (RHS) Chelsea Flower Show was always going to be the focal point of this year’s gardening season. Now it is all over, the excitement abated, the gardens starting to be dismantled – with one hopes some going on to new homes – and the gradual return of the site at the Royal Hospital, Chelsea, to its normal state, it is perhaps time to sit back and reflect on the experience and what highlights we took away.

Personally, I thought this was a vintage Chelsea. One always expects the gardens and exhibits to be of a high standard – ‘Nil Satis Nisi Optimum’ – and this year was no exception, however, for the first time in the last decade of visiting RHS Chelsea Flower Show, I found I couldn’t decide which was the best in show. Normally, I get this spot on, for the last three or four years I have plugged the right garden, but this year, no.

I am not a garden designer, so for me, the choice is purely on what I like more so than what I feel the judges will like and let’s face it, the majority of gardeners visiting Chelsea will feel the same, they are looking for something they can identify with and perhaps take part of something back to their own gardens. There were no particular show gardens this year which one could say ‘moved the earth’ as far as design innovation, unlike Sarah Eberle’s garden ‘600 Days with Bradstone’ depicting a garden located on a space station on Mars, which won best in show in 2007 – that was certainly different.

I also missed Diarmuid Gavin this year who always promises us something out of the ordinary and to this day I have never forgotten his lollipops garden (what fun) or his Irish Sky Garden. So, what did I really drool over when I first got into Chelsea?

The Arthritis Research Garden (Gold) was an instant hit. I like Chris Beardshaw as a designer – he seems to plant everything I love in the garden and his hard landscaping has always found appeal with me. This garden, sponsored by Arthritis Research, has an important message and one I could identify with as a severe arthritis sufferer. Chris is an inspiration to everyone who suffers which this disabling disease, (he was diagnosed with a form of arthritis when he was 19), and so his personal connection with the garden shone through every plant. Divided into three parts, we started the journey in the Veiled Garden, representing the fog of pain, with its contemporary glass retreat enclosed in a shaded area.

The stone pathway pushes us into the Lucid Garden where we learn to understand the condition and here the planting starts to take on the subtle accents of colour in blues and whites. Geranium lily Lovell and Brunnera Jack Frost, Euphorbia White Swan and Iris pseudacorus Creme de la Creme all feature here.

Finally, we emerge into the Radiant Garden which is protected with structural hedging and is filled with exuberant planting, warm, vibrant and exotic, where the sufferer has learnt to handle the disease. Escholtzia Californica, Angelica archangelica, Papaver somniferum ‘Black Paeony’ and ‘Dark Plum’ and the tall bearded Iris Supreme Sultan, all jostled for attention here. As Chris pointed out when he was being interviewed by Alan Titchmarsh, here were plants on steroids bursting with energy. The importance of sculpture in a garden was not overlooked either and I particularly liked Anna Gillespie’s ‘Homage’, an emotionally charged crouching bronze figure textured with acorns complementing the woodland setting.

The M&G Garden, Windows through Time, (Gold) designed by Roger Platts was another favourite. I immediately fell in love with this garden, wanted to walk in it, spend time exploring all the planting and have time to appreciate the gardening heritage which has come down to us through the last hundred years. The modern sculpture, the shrubs popular at the turn of the 20th century, the need for modern conservation methods, all were incorporated here in a delightful and well planted garden. Planting included: Acer japonicum ‘Vitifolium’, Acer Palmatum and Betula utilis. There were artemisia including Artemisia abrotanum and Artemisa absinthium ‘Lambrook Mist’, Euphorbia ‘Black Pearl’ and Euphorbia amygdaloides var. robbiae. Lavandula anguistifolia, Lavendula ‘Hidcote’, Philadelphus ‘Beauclerk’ and Pipposporum tenuifolium ‘Abbotsbury Gold.’ 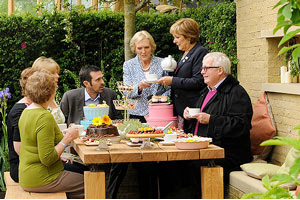 The Homebase Garden, ‘Sowing the seeds of change’ (Gold) designed by Adam Frost, drew me to it instantly. The beautiful blossom on the trees, the whole theme of outdoor living where we become one with the garden, all expertly demonstrated here. Here our picture (riht) shows some of Chelsea’s visiting personalities having tea on the garden, we only wished we could have joined them. Wondered if Mary Berry had made the cakes and how nice of Linda Bellingham to serve tea.

Chelsea is not just about gardens, there are sculptures, urns, greenhouses and all manner of garden sundries. There are also some characters you would not expect to meet outside on the street. There was a lady walking around in an Edwardian inspired floral dress who attracted quite a lot of interest and I came across a rather fearsome looking guy on the Stoke-on-Trent’s Story Transformation Garden (Silver). The couple of live garden gnomes I encountered I tended to avoid. I loved the ‘des res’ chicken coop, the sight of the Chelsea pensioner having a breather on the National Dahlia Collection, he looks so relaxed and those lovely clumps of forget-me-not on the B & Q Sentebale garden (Silver-Gilt).

Of course I was blown away by An Alcove (Tokonoma) Garden (Gold and best Artisan Garden), this perfection in minature on a site measuring only 5m x 7m, took the breath away, while the Hebridean Weaver’s Garden, (Gold) (pictured above left) reminded me so much of Lewis and the remoteness of the islands. 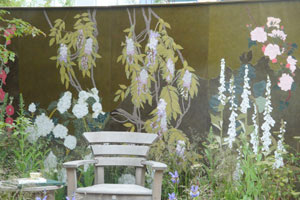 I had been looking forward to The Massachusetts Garden (Silver-Gilt) and I was not disappointed. (Pictured left.) This lovely space with its carefully worked huge leather panels sewn with intricate appliqued hollyhocks, foxgloves and irises, really was exquisite. The raised First Touch Garden (Gold) designed by Patrick Collins was another of my favourites and Patrick was so patient in explaining to me the meaning of his garden. Everything was at my eye level and the garden just seemed to float.

There were so many eye dazzling displays in the Great Pavilion I felt overawed. Wherever you turned, in every direction, there were show stopping plants. A great tribute to the growers and nurseries who have struggled with one of the coldest springs in the last thirty years and yet still triumphed with award winning blooms and plants.

All are memories now packed away for another year. Sad that there should be a little frisson over the judging this year although one can sympathise with designers who feel the judges have not fully understood their design. The judging process still seems very shrouded in mystery and perhaps it is time to be more open. 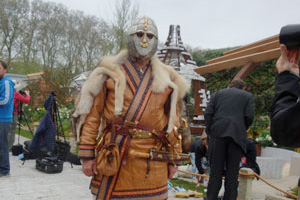 I am not qualified to comment on garden judging but I have a lot of experience in assessment and I would have thought there are plenty of more transparent assessment models which could be adopted in this context. Personally, I have often wondered why a garden got the award it did and I see no reason why the rationale of the judgements cannot be shared with the public. In many cases I am sure it would increase our understanding of the process.

Anyway, we move on – Hampton Court Palace next – and maybe the promise of some summer weather at last, I wonder!