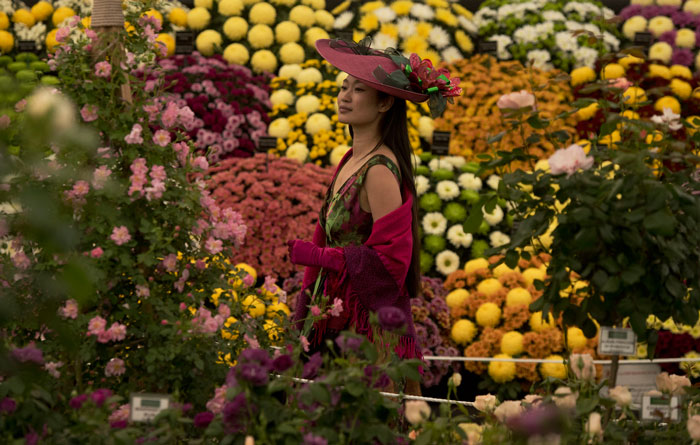 The Royal Horticultural Society (RHS) has announced details of the 2016 world famous RHS Chelsea Flower show (24th to 28th May 2016) which once again promises an exciting variety of innovative and quirky designs.

RHS Chelsea 2016, sponsored by M&G Investments, will also welcome back some well-known names in the horticultural world.

Fans of Cleve West will be delighted that he is to return to RHS Chelsea with a garden inspired by a memory of the ancient oak woodland on Exmoor National Park, where the designer spent his teenage youth. 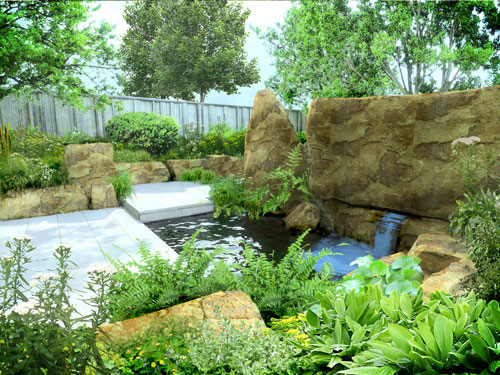 Cleve, a multi-award winning designer, is designing the M&G Investments garden. (pictured above).Cleve has a reputation for imaginative and contemporary gardens and one feels sure that once again we will be delighted at his interpretation of the rocks and woods of Exmoor.

Those of us who remember Diarmuid Gavin’s multi-tiered garden in 2011, will also be delighted at the promise of his return. Dairmuid won Gold for his quirky 2011 garden and one feels sure there will be another great design from him for 2016. 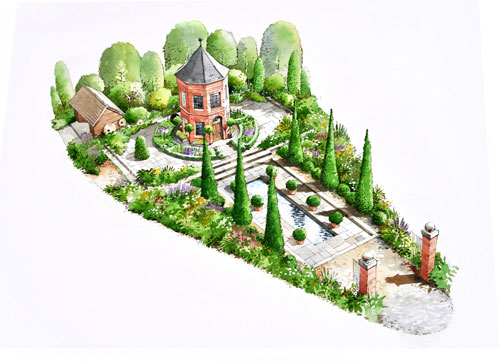 The ‘Harrods British Eccentrics Garden’ in partnership with Diarmuid, (pictured above) is inspired by the inventions of some of the UK’s most imaginative minds, such as the cartoonist William Heath Robinson, known for his drawings of ridiculously complicated machines. He will be designing a gentle garden of terraces and topiary complete with octagonal folly and sunken Italianate pond.

I am really looking forward to seeing Rosy Hardy’s first show garden – “Forever Freefolk” – sponsored by Brewin Dolphin. Inspired by endangered chalk streams, which provide a rich habitat for aquatic plants, insects and wildlife, but are slowly disappearing, Rosy will track the path of a vanished chalk stream in north Hampshire as it passes through various transitional planting. 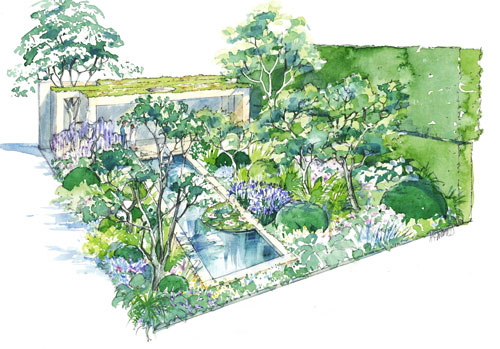 Another show favourite, Chris Beardshaw, is to return to Chelsea with a garden for Morgan Stanley. (pictured above) This will be rebuilt on the roof of Great Ormond Street Hospital after the show. We can always expect something stunning from Chris and I feel sure this will be another garden to excite.

I always look out for the L’Occitane Garden which has over the last few years always been one of the highlights of Chelsea for me. James Basson returns to Chelsea as designer for L’Occitane to follow on from his success in 2015. His garden provoked much interest and was certainly popular with show visitors.

Jo Thompson, another talented designer who seems to work magic with every garden she designs, will be back with the “The Chelsea Barracks Garden” while RHS Young Designer of the Year 2010, Hugo Bugg, returns with a garden for the “Royal Bank of Canada Garden”.

East will meet west when Chihori Shibayama and Yano Tea create their first-ever Chelsea garden for Watahan & Co., wich aims to convey the diverse cultures of the UK and Japan. The design will reflect both the manicured minimalist Zen gardens of Japan while incorporating the dense informal planting styles found in the UK.

Sarah Eberle, another Chelsea favourite, draws international inspiration for her garden for Viking Cruises in the Artisan Garden category. Her design is based on the floating gardens of the silk-weaving region of the Mekong River in Cambodia.

We really are going to be spoilt in 2016 because if that was not enough, “The Daily Telegraph Garden” (pictured below) will be designed by Andy Sturgeon, which features the work of 10 different craftsmen including architectural ironworks, artists and sculptors.

The Fresh Garden category can be counted on for some innovative designs and 2016 will see Juliet Sargent, on her Chelsea debute, design a garden tracking the controversial subject of modern-day slavery. The Marble and Granite Centre design duo, Martin Cook and Gary Breeze, have created a garden set inside a giant 2.5m granite cube as a representation of a world turned inside out.

Also in this category, the World Vision garden designed by John Warland, symbolizes how unpredictable and vulnerable life is. I am pleased that John Warland is returning to Chelsea with a garden for Meningitis Now.

The Great Pavilion has a few changes for 2016 too. Regular show goers will be used to the central monument site being occupied by Hilliers. However, the 2016 show will welcome Devon-based multi-RHS Gold medal winning nursery, Bowdens. Centrepiece of their exhibit will be an 80ft-long carriage from 1920s Belmond British Pullman, sister train to the legendary Venice Simplon-Orient-Express) with liveried stewards, linen and crockery, which will stand in the middle of a time-travel journey, with plants ranging from beautiful hostas on Platform 1 to rare jungle ferns Platform 2, taking you on a plant seeker’s journey. All I can say is wow.

First-time exhibitors in the Great Pavilion, include Tom Smith Plants, Hoggarth Hostas and Love the Plot You’ve Got.

Tickets are on sale from 1st December for general sale and are on sale now for RHS members. Log onto rhs.org.uk/flowershows for details.