The Director General of the Royal Horticultural Society (RHS), Sue Biggs, has received the award of Commander of the British Empire (CBE) at an investiture ceremony at Buckingham Palace. 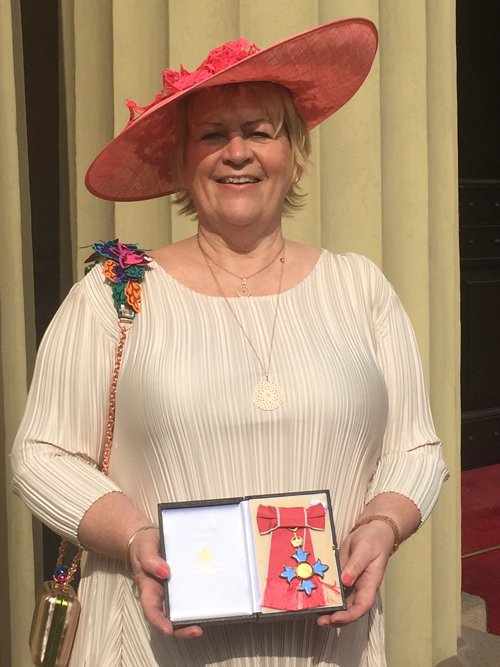 Sue was invested with her honour by His Royal Highness, The Prince of Wales, in recognition for services to the environment and horticulture.

Since her appointment seven years ago, following a successful career in the travel industry, Sue has transformed the 213 year old charity, considerably increasing the reach of its community gardening campaigns, growing its membership to 475,000 and inspiring more people to garden.

She has also overseen a £160 million investment programme into the future of horticulture. This investment will help create a more sustainable and better society now and for generations to come as well as creating a new RHS fifth garden in Salford.

Sue played a significant role in bringing the horticulture industry together to create the Ornamental Horticultural Round Table Group (OHRG) to promote the Garden and Landscape industry and its far-reaching benefits to the economy and the nation. The RHS has been highly active in promoting the use of private gardens, trees and green-spaces that act as important habitats for pollinators as well as mitigating against flooding and tackling air pollution.

Sharing the vision of the health benefits of gardening and the role that horticulture can play in the treatment of some with chronic health conditions, and our general wellbeing, the RHS has also promoted the delivery of skills, techniques and products that have vast economic and environmental significance.

Sue is extremely proud to receive a CBE, which she says is on behalf of everyone at the RHS and even prouder that the horticultural industry is receiving the recognition it so deserves in the role it can play to improve the environmental and economic health and well-being of the nation.

“Horticulture, gardening and access to green space present an unrivalled opportunity to improve the nation’s health and quality of life,” said Sue. “By encouraging the nation to get outside and garden, some of the wider determinants of ill health can be tackled in a cost effective manner. The growing evidence base suggests that offering horticulture therapy through social prescribing can have a major positive effect on long term outcomes of treating conditions such as mental health, obesity and physical inactivity, ageing and social isolation,” she continued.

After 30 years in the travel industry, Sue knows how much garden tourism can contribute to this country’s economic health and points out: “We also urgently need the skills to grow our own food.  Our commercial food production, gardening and landscape industries are amongst the finest in the world – we should be proud of them and do everything we can to boost their success.

“For me, this CBE is a step further to everyone taking horticulture seriously and appreciating the immense benefits that greening this country and investing in horticulture will bring,” Sue stressed.

We offer our congratulations to Sue on her honour – richly deserved.