Wedgwood’s 260th anniversary show garden has made RHS history as the first to secure the highest accolades that can be achieved in all four judged categories. Designed by RHS Ambassador, Jamie Butterworth, the garden achieved Best in Show and Best Construction Awards, a Gold Medal and People’s Choice.

(above: Jamie in the Wegdwood Garden ©Silver Ball)

Garden designer Jamie Butterworth from Butterworth Horticulture is obviously completely over the moon: “Creating my first show garden for such a prestigious brand has been a real privilege and to mark such a special occasion with four top honours is just incredible,” he said. “I set out to create a garden that would be both welcoming and inspiring, a garden that is relatable with lots of take-home ideas and it’s wonderful that the public have taken it to their heart because I put a lot of mine into it, we all did,” he added. Jamie is only 24 years old and the Wedgwood garden was his first ever show garden design making his historic achievement even more special.

(above: The Wedgwood Garden Gold and Best in Show ©TimHowellX)

Jamie’s design was inspired by RHS Founder John Wedgwood’s vision of using the power of horticulture and plants to unite and connect communities. The garden’s colour palette referenced Wedgwood’s Jasperware of rich sky blue, lush greens and deep crimson, the garden design is simple and scaled back to bring the planting to the fore.

The heart of the garden is a delightful seating area with a substantial solid oak table created from an oak tree that grew not far from where John Wedgwood lived in Gloucestershire. Planting encompassed majestic copper-hued Fagus sylvatica ‘Purpurea’ and elegant Cornus kousa var. Chinensis along with plants that grew in John Wedgwood’s garden such as Lathyrus odoratus, Veronica, Allium and roses.

(above: The Space Within (Gold) ©TimHowellX)

The third RHS Chatsworth Flower Show has proved highly successful, cementing the Show firmly in the gardening calendar. Thousands of visitors flocked to the floral spectacular set against the magnificent backdrop of Chatsworth House. A mass planting of 6,000 Dahlia ‘Salinas Bicolor’ an impressive Power of Trees feature and a spectacular floral immersion experience delighted visitors.

A total of three Gold Medals were awarded for the show and mindfulness garden categories – The Wedgwood Garden, Space Within, (pictured above) designed by Rae Wilkinson (winner of best Mindfulness Garden) and Eutierria (pictured below) designed by Neil Sutcliffe. Silver-Gilt was awarded to the Thrive Reflective Mind Garden designed by Richard Rogers.

Silver went to Derby College for Find yourself … lost in the moment and Lynn Heslop for From Darkness to Light.

Tending the Mind designed by Brent Purtell and The ‘Mandala’ Mindfulness Garden designed by Rachael Quin were awarded Bronze.

In the Long Border category, which this year attracted a strong field, Best Long Border went to Victoria Philpott for Bess of Hardwick Border (Gold). In that category, seven Gold Medals were awarded this year demonstrating the strength of the exhibits.

Liz Patterson, RHS Chatsworth Flower Show Manager commented: “Visitors have absolutely loved celebrating the senses of horticulture with us over the last five days. Our 13 superb show gardens got huge amounts of attention along with the creative Long Borders which so many people said they were inspired by. The Floral Marquee was heaving with people keen to snap up plants, and pick up advice and tips from more than 70 growers.”

(above) RHS Garden for Wildlife ©TimHowellX

Proving hugely popular were the two feature gardens in the Without Boundaries category (not judged). The RHS Wildlife Garden: Wild Woven (above) with practical tips on how the UK’s 24 million gardens can be transformed into a network of nature reserves, encouraging hedgehogs, house sparrows and starlings back through native and non-native planting. Designed by Sharon Hockenhull, the garden included a small pond, nooks and crannies within rocks and a wildflower meadow. 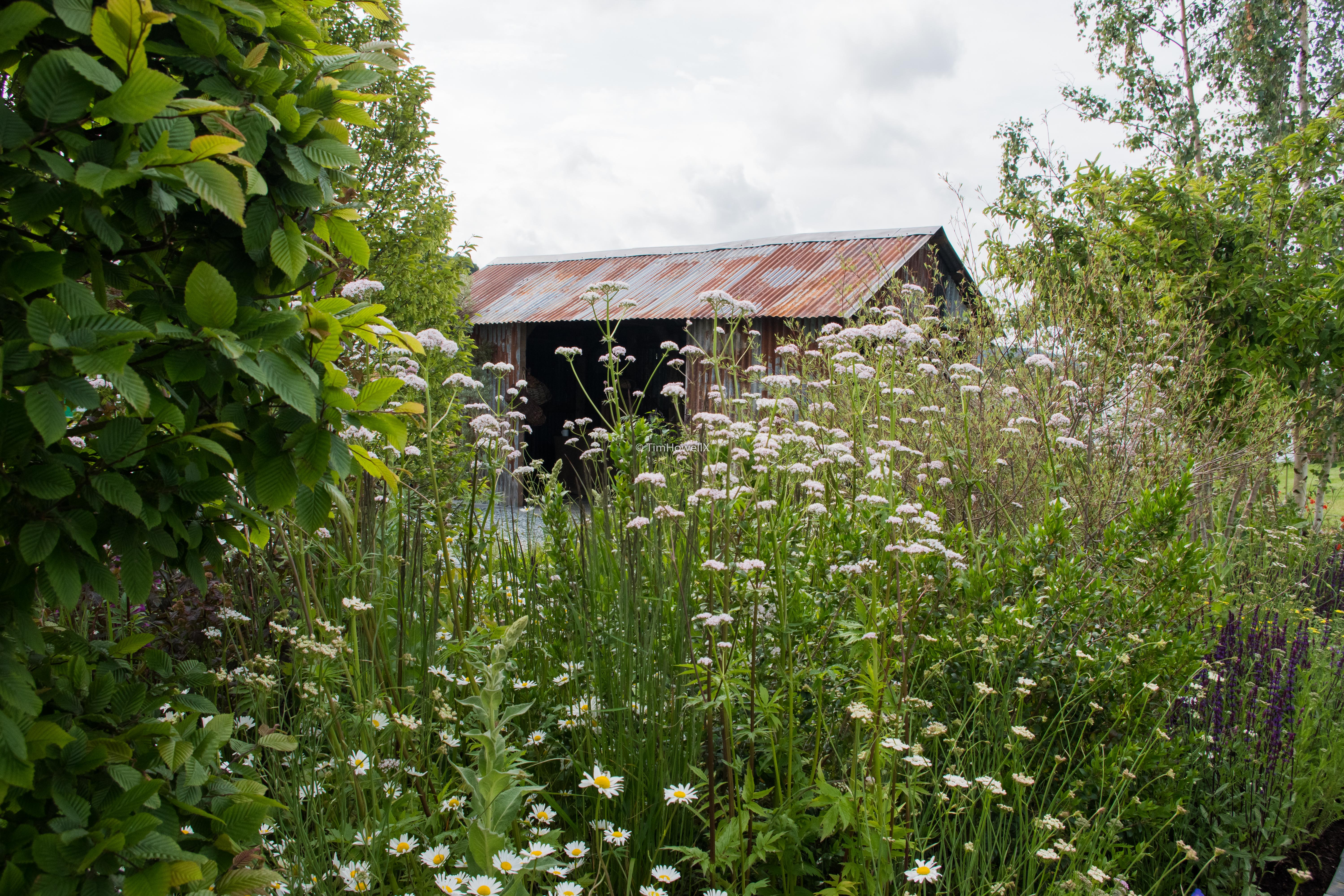 (above) aspect of the Brewin Dolphin Artists’ Garden ©TimHowellX

The other feature garden, designed by award-winning designer Paul-Hervey Brookes, (above) was the Brewin Dolphin Artists’ Garden, a space celebrating craftsmanship and the importance of creativity in building a richer environment for all.

After the show, the multi-award winning Wedgwood garden will be relocated to the World of Wedgwood in Barlaston, joining Jo Thompson’s Wedgwood garden from this year’s and last year’s Chelsea Flower Show and also Sam Oven’s garden from the inaugural Chatsworth Flower Show.(pictured left: a focal point from Richard Rogers’ The Thrive Reflective Garden (Silver-Gilt).