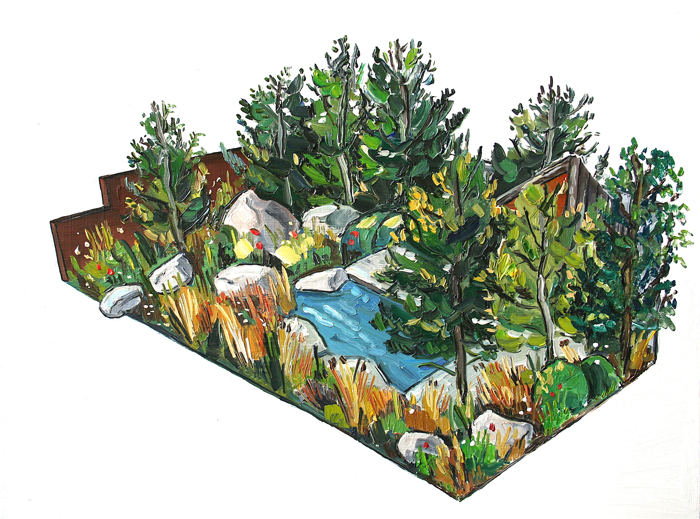 This will be Charlotte’s first show garden and she will be drawing inspiration from Canada’s Boreal forest and waterways in the 150th year of the Federation of Canada.

Charlotte is no stranger to RHS Chelsea as she has previously worked on a number of Main Avenue gardens, including Luciano Giubbilei’s Best in Show garden of 2014 and Hugo Bugg’s Royal Bank of Canada Garden in 2016. Charlotte has chosen a strong female design team including architect, technical detailer and horticulturists.

The Boreal forest is the larges intact forest and wetland ecosystem on earth, holding the largest unfrozen source of freshwater and storing twice the amount of carbon as tropical forests (according to The Pew Environment Group, International Boreal Conservation Campaign). The garden seeks to create a space inspired by this landscape, rather than to recreate it. A wilder garden folds around man-made elements, crafted from materials evocative of the boreal. The garden will feature pines, larches and birch.

When designing the garden, Charlotte spent time in northern Ontario exploring on foot and by canoe, navigating the waterways, pine forests, flora and granite of the Boreal: “This time was a precious source of inspiration for the design, providing an appreciation of what comprises this unique and beautiful environment, as well as the importance of living sustainably and in harmony with our precious ecosystems,” she explains.

This will be the seventh garden for sponsor the Royal Bank of Canada and CEO, RBC Wealth Management – International, Stuart Rutledge, commented that they were excited to partner with Charlotte for the 2017 Show: “The garden design is a tribute to the beauty of Canada’s boreal forest. As one of the largest Canadian companies in the UK, we look forward to bringing Canada to Chelsea and marking the country’s 150th birthday,” he said.

Hopefully, the all-female design team will inspire more women to consider a career in garden design and it is good to see them on Main Avenue. Best of luck to everyone in the coming months.