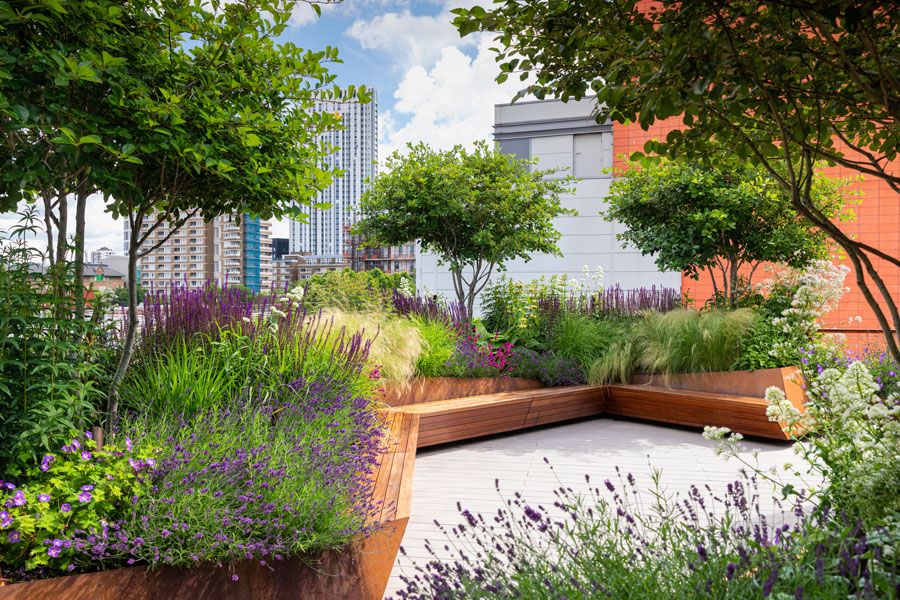 Winners of the prestigious Society of Garden Designers awards were recently announced at the eighth annual award ceremony in London which saw 19 awards being presented including the SGD Lifetime Achievement Award.

The most prestigious award of the night – The Grand Award – went to John Davies for a contemporary roof garden in London, described by the judges as ‘hugely creative’.(pictured banner above). John was also awarded best Public or Commercial Outdoor Space for the design. The judges said that the roof garden “had been brilliantly executed demonstrating environment responsibilities that we should all be embracing”.

The coveted Judges’ Award went for the second consecutive year to Adolfo Harrison MSGD, for the ‘Bamboo & Mirror Garden’. (above) The garden is a triangular plot designed with living walls, mirrors and sedum roofs to distort and enlarge the space and to disguise playhouses and sheds. Adolfo’s garden also won the Garden Jewel Award marking it the second year that he has won both awards. 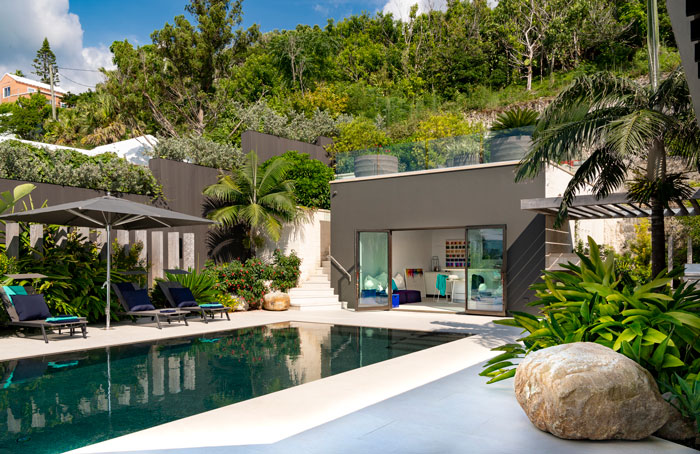 The International Award went to Society Fellow Andy Sturgeon FSGD for a garden in Bermuda that the judges called, ‘contemporary design at its finest’. The garden, built around a house that has been carved out of coral rock, incorporates a pool garden, a cliff garden and a cave bar. The Judges said that the garden demonstrated, ‘meticulous finesse and attention to detail, stunning stonework and a fabulous plant selection in its associations to form, architecture and year-round interest.’ (pictured above).

The People’s Choice Award (the only award determined by public vote) went to Debbie Roberts MSGD of Acres Wild for a residential garden in West Sussex. This garden was also named best Medium Residential Garden admired by the judges for its ‘colour palette that harmonises with the local vernacular and spaces that flow, creating wonderful journeys through the garden.’

The Beth Chatto Award was won by Sue Townsend MSGD for a coastal garden in Suffolk. Sue’s design was also winner of the Big Ideas, Small Budget Award. (pictured above). David Ward, the Garden and Nursery Director at The Beth Chatto Gardens, who assisted in the judging, said the garden was a ‘a worthy winner of the inaugural Beth Chatto Award and certainly a garden that would have met with Beth’s approval’.  The judges also remarked on the ‘considered use of locally sourced materials’ and the ‘well-chosen palette of drought-tolerant plants and contrasting foliage that was thoughtfully laid out’.

Butter Wakefield, an SGD newcomer, also picked up two awards on the night in the Small Residential Garden and Hardscape categories. The winning garden was created in a long, narrow plot alongside a London townhouse and uses intricate sets of interlinking paving circles joined with a ribbon band of cobbles.

Helen Elks-Smith MSGD was awarded Large Residential Award for a modern, multi-level garden in Lymington that the judges said was ‘an extremely high-quality design and build.’ 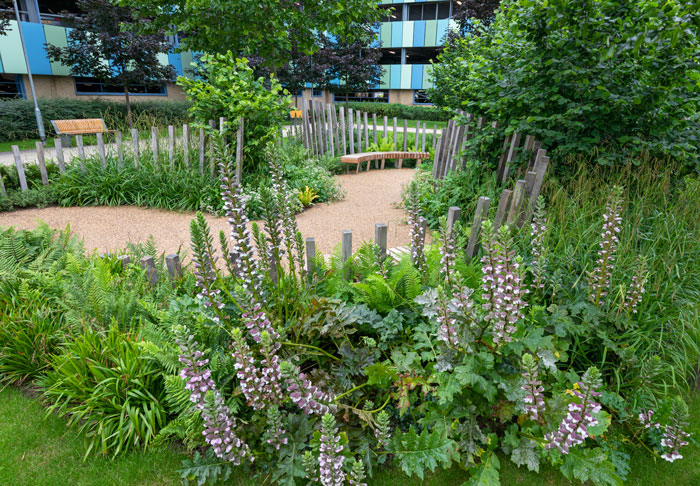 Landscape Company Bowles & Wyer, led by John Wyer FSGD, won the Healing, Learning or Community Award for a community garden at Addenbrookes Hospital originally designed as a show garden at the RHS Tatton Flower Show and relocated to mark the 70th anniversary of the NHS in 2018.(pictured above).

In the Fresh Designer category, Caitlin McLaughlin was named winner for an ‘accomplished design’ that the judges thought ‘showed thought, self-confidence and a mature restraint that one would not necessarily expect to see so early in a designer’s career.’ 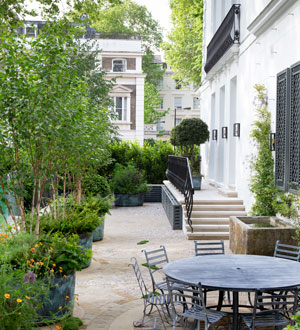 SGD Chair, Sarah Morgan said: “We are very proud to have among our membership some of the most talented garden designers in the world. The SGD Awards are a wonderful opportunity to celebrate these designers and to showcase some of their inspirational work. Each and every one of these awards is thoroughly deserved and I congratulate everyone on their achievements this year.  I would also urge anyone who has not entered the SGD Awards before to consider entering a project this year. We know there is some exceptional work being done by members in the industry and we would love to share and reward these projects.” 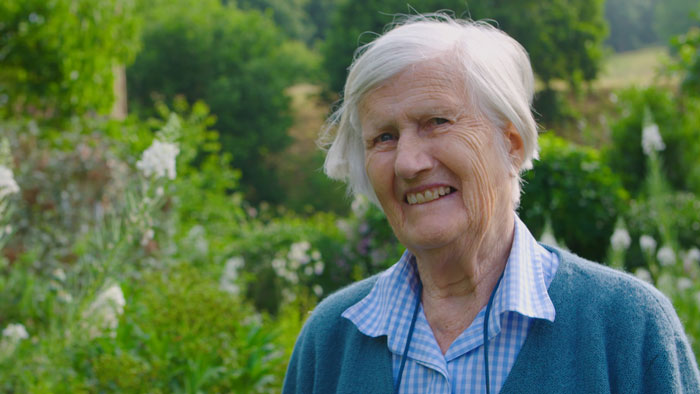 The special award of the night – the SGD Lifetime Achievement Award – was presented to plantswoman and garden designer, Penelope Hobhouse. (pictured above).This award is presented to an individual who has made an outstanding contribution to landscape and garden design. At the presentation SGD Chair, Sarah Morgan said: Penelope Hobhouse has influenced and inspired garden design for decades through her plantsmanship, design and writing. Self-trained in practical horticulture and design she nevertheless forged a hugely successful career, thanks to her love and knowledge of plants and instinctive design talent”

Penelope learned her art by developing her own family gardens and nurturing her practical skills and plant knowledge. Hadspen House in Somerset is where she reclaimed long and neglected land, battling against pernicious weeds and learning the practical side of gardening through tough hands-on experience. Then as tenants at the National Trusts’ Tintinhull, Penelope and her second husband John Malins, worked seven days a week to create an intimate, planterly garden that was visited by thousands every year. Later, following John’s death, she moved to Bettiscombe in Dorset where she gardened in a milder climate.

Through the 1980s Penelope became enormously popular in the United States, through her writing, lecture tours and designing. Today, Penelope’s public design work can be seen at Walmer Castler, RHS Wisley and the New York Botanic Garden and her many books provide valuable resources for anyone studying garden design and garden history as well as giving inspiration and practical instruction.