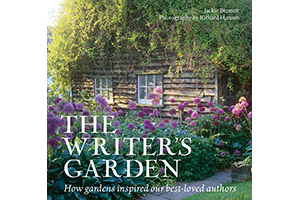 When Jane Austen, Agatha Christie and Charles Dickens wanted inspiration for the characters or settings in their books, they looked first to their own gardens and landscapes.

In ‘The Writer’s Garden’, Jackie Bennett goes inside the lives of 20 influential authors to discover the roles that gardens played and their influence on their writing.

We know ourselves how our own gardens have inspired us at various times in our lives and we can certainly find resonance with Elizabeth Von Arnim when she wrote in 1898 that: “The garden is the place I go to for refuge and shelter, not the house …. there …… I feel protected and at home, and every flower and weed is a friend.” A passage just as relevant today as it was then.

As the author points out in the Introduction, great things happen in gardens. She cites as an example Daphne du Maurier’s Rebecca, where the reader can be in no doubt that the author herself lived with the huge, blood-red rhododendrons that the heroine first sees on arrival at Manderley.

As we read about the influence of the garden on each author we also discover that although some indeed hired gardeners, many, such as Virginia Woolf and Walter Scott, actually worked in their gardens. Scott planted trees, Beatrix Potter loved taking plants from other people’s gardens for her own and Winston Churchill delighted in building walls!

I enjoyed the mix of history, personal anecdote and description of each of the gardens featured. The influence of the Pennine landscape on the poet Ted Hughes and Lumb Bank, which never really became his permanent home, the Battery at Greenway which features in several of Agatha Christie’s books and the Vegetable Garden at Hill Top which Beatrix Potter  almost certainly created with Mr McGregor in mind.

The Writer in Residence box included with each writer is a useful addition outlining the works completed by the writer during their tenure.

The section on Kipling and the influence of Bateman’s is particularly interesting. We discover that when Kipling won the Nobel Prize for Literature in 1907, he used the prize money of £7,700 to start major improvements to his garden. His move to Bateman’s marked his fascination with the history of England and the landscape of the Sussex Weald. His books ‘Puck of Pook’s Hill'(1906) and ‘Rewards and Fairies’ (1910) are firmly rooted within the Bateman’s estate.

In many respects writers’ gardens are often as iconic as the writer’s who worked in them and I felt the author has achieved a good balance between the writer, setting and the landscapes with which they were familiar.

Richard Hanson’s photography is superb throughout with a good mix of landscape, architecture and horticulture. His photograph of Abbotsford has certainly stimulated my desire to visit this wonderful Scottish garden and he succeeds in perfectly catching the mood of each landscape.

Sometimes a garden can be a backdrop to a good story or it can be the lifeblood of a vivid creation. Certainly, each garden reveals something of the author’s secret nature and Jackie teases this out.

Jackie Bennett is a former editor of The Garden Design Journal, the English Garden Magazine and Gardening with the National Trust. She won the Garden Media Guild’s Gardening Column of the Year in 2009 and she is the author of several books.

Richard Hanson’s work has appeared in books and magazines and he has photographed in the gardens of well-known garden writers such as Ursula Buchan and Helen Yemm.

‘The Writer’s Garden’ by Jackie Bennett is in hardback and published by Frances Lincoln – www.franceslincoln.com – at £25.00.