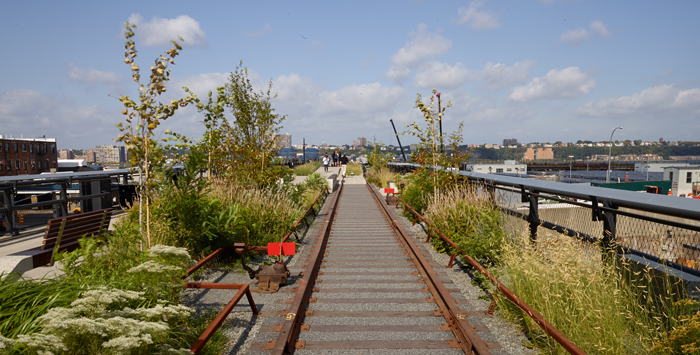 Photographer Allan Pollok-Morris has spent the last year photographing and discovering New York’s High Line and in particular Phase 3 of the project. In this feature he shares with us the realisation of a dream spanning more than 15 years to transform the 1.45 mile-long elevated freight rail structure on Manhattan’s West side into a model of urban re-use, which has gained international acclaim.

The realization of a dream was celebrated on 20th September 2014 when the third phase of New York’s acclaimed High Line was opened. The opening of the northernmost section marks 15 years of advocacy for the Friends of the High Line, which began in 1999 when Joshua David and Robert Hammond, two neighbourhood residents, had the vision to preserve the High Line and create a new, innovative public space for New Yorkers and visitors. 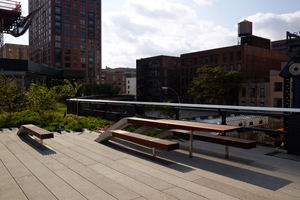 The High Line opened to trains in 1934 on Manhattan’s West side, for the purpose of carrying meat, produce and factory goods. The last train ran on the line in 1980 and in 2006 ‘groundbreaking’ on the first section of the park took place. This first section ran from Gansevoort to West 20th Street and opened in 2009. The second section opened in 2011 from West 20th to West 30th street. Finally, in 2014 the third phase – the Rail Yards – opened from West 30th to West 34th.

Over the past year it has been lovely to discover the 30 years story and heroic efforts involved in the saving of the rail yard structure. I have been impressed by the effective design, accomplishment of the build and the involvement of the local community and what a small area of park might achieve in a big city.

Any lover of Naturalistic planting and contemporary hard landscaping can marvel at literally millions of people being funnelled through an exquisite experience, however, leaving aside the overwhelming praise for the existing sections of the High Line, the first reaction on seeing the new section is the makers have clearly taken on board the park’s more functional lacking and have expanded the project in certain directions.

The importance of these public spaces in the 21st century cannot be underestimated and when the public space connects with our industrial heritage, with the added bonus of contemporary design, everyone wins. 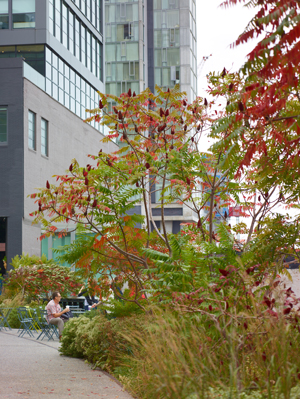 I will always remember Charles Jencks’ words that the motivation for the Garden of Cosmic Speculation began by wanting somewhere for the family to swim and that good design always begins with function. The new section of the Highline capitalizes on its role as a latter day addition in the life of the project by giving more practical functionality.

In response to public feedback, the third phase includes familiar elements like the iconic “peel-up” benches, intimate overlooks and meandering pathways while introducing design features such as a children’s exploration area and an interim walkway that wends through the existing landscape of self-seeded wildflowers, native grasses and shrubs.

The Interim Walkway features a site-specific High Line Art commission by Adrian Villar Rojas and from here visitors can take in expansive views of the Hudson River and the cityscape or just relax in one of the four gathering spaces.

This new phase capitalizes on a sense of nostalgia by simplifying the renovation over a long section laid out with the original track and left to self seed with wild planting. The fence that acts as a stark barrier between the asphalt and this area of nature is very noticeable, but I’m told it will come down eventually, although it leaves you with the suspicion there may be more development to come.

This area is not lit at night and will be closed earlier than the rest. Building on the experience of the first two phases, the designers have provided a more themed nostalgia for the abandoned aesthetic of the rail track pre-regeneration. There is a wheelchair/buggy accessible area of track and for those wanting the authentic High Line experience there are areas of the original rail tracks left to self seed with wild planting. 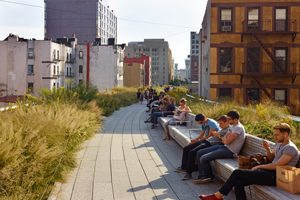 The Rail Track Walks feature three linear walks, located at different areas along the High Line at the Rail Yards evoking the High Line’s history as an active freight rail line. The Pershing Square Beams provide a unique design feature for kids where the High Line’s concrete deck is stripped away, revealing the original framework of steel beams and girders, transformed into sunken areas that children can run between, climb over and pay within.

The northernmost section of the High Line has been designed by James Corner Field Operations (project lead), Diller Scofidio + Renfro and Piet Oudolf – the same designers behind the first two sections of the High Line park.

Renaissance of Manhattan’s west side 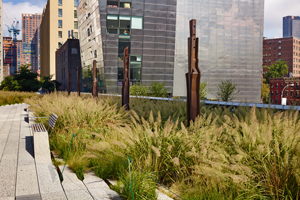 At the opening of the third phase, Kyle Kimball, President of the New York City Economic Development Corporation said: “The High Line has brought about the renaissance of Manhattan’s west side, connecting New Yorkers with a pioneering new park and inspiring new ways to think about legacy public assets around the city and world. It’s a prime example of how smart public investment can create extraordinary returns for New Yorkers.”

The opening ceremony marked the start of a week-long schedule of free public events and activities for New Yorkers and visitors to highlight the many ways to experience and enjoy the park.

As I was at the opening I was able to hear the experiences of people using the High Line. There was something very special in talking to someone who has supported the project the whole way, now in their 60s, who used to come and play there as a kid. The sense of discovery and adventure in these experiences was visceral. 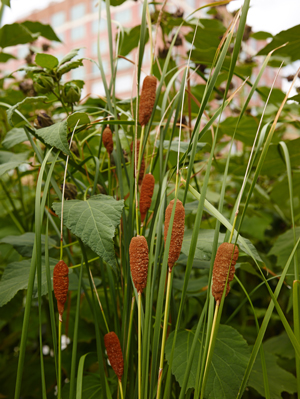 I was able to discuss further development in the open areas around the High Line with Mitchell J. Silver, the commissioner for New York’s Parks. The wide area of rail yards that the new section circles around will all be covered and developed over a 5-10 year period and there is planning in progress for a number of significant new high rises the length of the High Line with another ground level green corridor of wider parks that will lead north.

The High Line is owned by the City of New York and maintained and operated on behalf of the Parks Department by the Friends of the High Line. The Friends’ work towards raising the essential private funds to support more than 90% of the park’s annual operating budget.

Speaking with civil servants and politicians on the subject I got a sense of the challenges the founders of the High Line project and Friends of the High Line experienced in pushing the idea of a park on the site.

Speaking at the opening ceremony, City Mayor de Blasio commented that: “The High Line is a true testament to our city’s embrace of innovative and pioneering urban planning. What was once a dilapidated train track has been transformed into a world-renowned park, thanks to the dedicated efforts of two neighbourhood residents and a strong public-private partnership.”

It has changed the environment for people in similar situations around the world, but the success story for the city isn’t so much one of recreation, but the wider regeneration of the area and increase in property values to the point where the world’s best known architects are now seeking permissions in the area which can only further exaggerate the High Line as a an oasis in city life.

Opening Ceremony of Phase 3 – the realisation of a dream.

©All photographs are copyright of Allan Pollok-Morris.