Behind the scenes at the Trailfinders Chelsea garden

Sandy Felton takes a look at the build-up for the Trailfinders Chelsea Garden and what’s involved in building a show garden.

Building a show garden at the RHS Chelsea Flower Show in under three weeks is no mean feat considering the starting point is a green field site in central London. When visitors attend the prestigious Show and see the superb world-class finished gardens, it’s difficult to envisage that only a short time ago there was nothing there but grass. Chelsea’s world class show gardens look as though they have been there for decades!

So, read on for a sneak preview of what it is like, at this stage of the planning, to build a Chelsea garden – in this case The Trailfinders South African Wine Estate Garden, designed by Jonathan Snow.

Contractors and designers gain access to the showground around 1st May and have to move mountains of earth in a very confined space to allow plants or large trees to be craned and heaved into place. Everything has to be coordinated like a well choreographed ballet with precision timings so that every garden has the opportunity to finish on time and be in the running for an RHS medal come Tuesday morning.

The designer designs the garden but it is the landscape contractors who will have the work of constructing the design. These unsung heroes work closely with the designer so that everything works to plan. The Trailfinders Garden will be his first Chelsea garden and Jonathan has chosen to work with a very experienced contractor in Mark Richardson from Stewart Landscape Construction.

Over the years’ RHS Chelsea has seen some very elaborate designs entailing quite a lot of intricate hard landscaping and for the Trailfinders garden, Jonathan will be recreating a garden within a landscape. A representation of that landscape (The Cape Fold Mountains) will be recreated as the backdrop to the garden with 40 tonnes of quartzite stone sourced from near Glencoe in Scotland.

Now obviously, you cannot just deliver 40 tonnes of quartzite stone direct to Chelsea and hope that it all fits perfectly, so the team have completed a mock-up of every rock, numbering each one for ease of positioning when it comes to the onsite build. 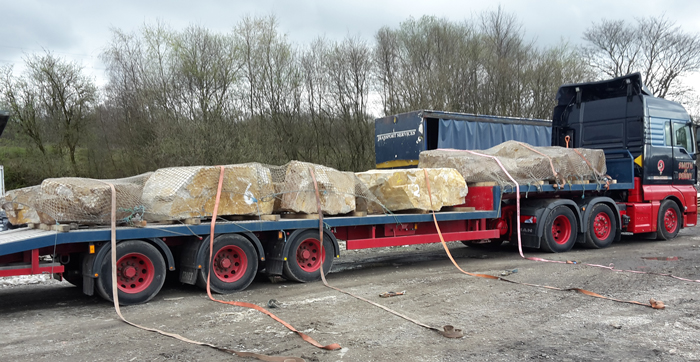 The rocks are perhaps the biggest challenge on this build – sourcing and trying to carry the same colour tones through the garden (reds, oranges etc). Overall the garden and everything in it will have a slightly weathered, aged and sunbaked feel to it.

When I saw the plans for this garden I was immediately drawn to the homestead and the surrounding landscape. Clearly, there will be a lot to look at in this garden and I am sure Chelsea visitors will delight in Jonathan’s depiction of a lovely old homestead in the Western Cape and the endemic vegetation of South Africa. As I learn more about the preparation for the garden and on-site build I have to say I am even more impressed. 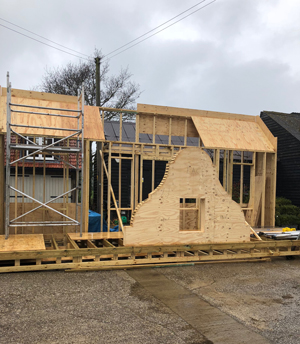 The team have made a wooden frame (pictured left) of the homestead which will be painted in dark green – Western Cape Style. The gate in the garden wall is inspired by visits to the many wine estates that are found in and around Franschhoek and Stellenbosch. The sourcing of the terracotta tiles for the patio of the homestead has proved tricky, explains Jonathan, but a solution came from Antique Style Flooring’s terracotta replica tiles. The render of the house and garden walls will have a rough authentic finish and the thatch will be recycled.

In South Africa thatch would be made from fynbos restios, an example of how the landscape through to the house and garden. Aged wooden oak wine barrels will serve as planters on the terrace.

As you can imagine a build of this type is not without its challenges. Given the weather, it has not been easy to keep the wooden frame and cladding dry and warping was a major worry. On site the cement-board clad wooden skeleton will be carefully rendered at Chelsea by two master Partgeters. Pargenting is an ancient form of ornate exterior plastering still practised by a few artisans in Suffolk and much like expert thatching, it is now sadly a dying art.

Two thatchers will thatch almost 140 bundles of Norfolk reed in just four days and this needs to look authentically weathered to give the right character to the show garden so the team have sourced three-year-old thatch!

Constructing the garden will incorporate old and new technologies. For example, the coping is actually made out of stryrofoam that is then going to be rendered to look authentic. Landscaper Mark believes this may be a Chelsea Flower Show ‘first’!

Designer Jonathan’s inspiration for the garden came after visiting South Africa and he has returned many times to walk in the fynbos with a local botanist who shared his knowledge about this vegetation which is seriously under threat from invasive non-native species, urbanisation and agriculture. 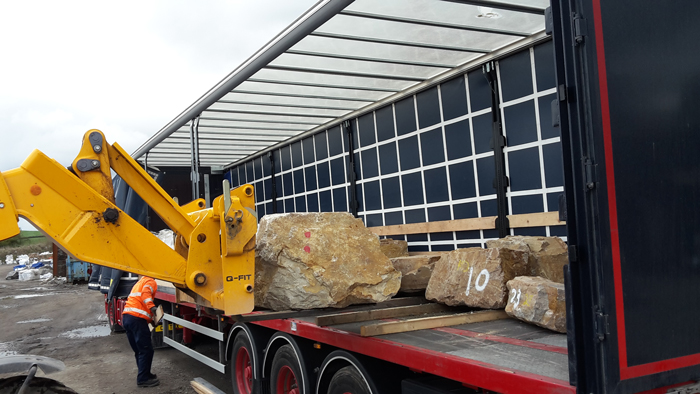 (above) Rocks being loaded ready for delivery to Chelsea, each individually numbered for onsite build.

Jonathan hopes that the garden will go some way to raising awareness of the smallest but most botanically diverse of the world’s six plant kingdoms and we certainly hope so too.

For Sponsor Trailfinders, who brought the Trailfinders Australia Garden to Chelsea for eight years, until 2013 when they finished on a high with a Gold medal and Best in Show, they are delighted to return for 2018 with a show garden depicting South Africa which is one of Trailfinders  most sought after holiday destinations.