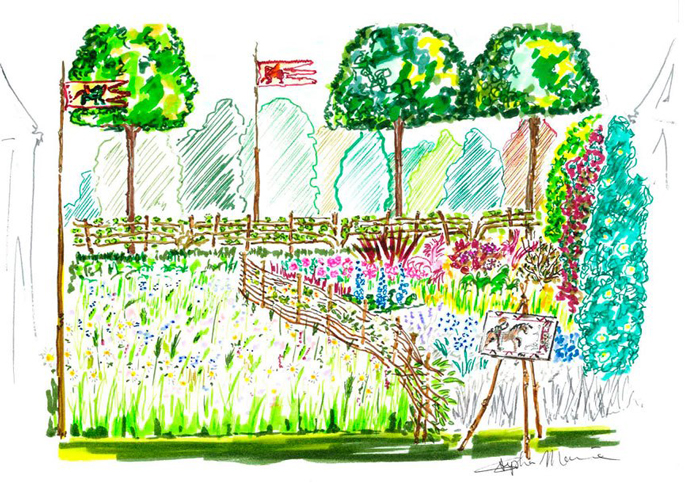 The 950th anniversary of the Battle of Hastings will be celebrated at the 2016 RHS Hampton Court Palace Flower Show when sponsors Normandy Tourist Board and Hastings & 1066 Country, showcase ‘Le Clos d’Hastings Medieval Garden’.

Normandy and Hastings & 1066 Country share more than just William the Conqueror and both sides of the Channel have a strong tradition of parks and gardens. To mark the 950th anniversary of the Battle, famously depicted in the Bayeux Tapestry, the parks and gardens of Normandy and Hastings & 1066 Country will exhibit a medieval-themed Normal garden, celebrating the natural synergies between England and Normandy.

Designed and created by Normandy natives Stephane Marie, gardener and TV presenter, and Alexandre Thomas of the Agapanthe Gardens near Rouen, the idea behind Le Clos d’Hastings Medieval Garden has been to re-create a centuries old landscape: hedges built up on steep banks and traditionally planted with bushes and low trees then trained to form a fence of interwoven branches.

These hedgerows were also planted with larger trees to create the effect of a linear forest that typifies Normandy’s so called bocage landscapes.

The design will also evoke ancestral meadows with barley growing alongside flax, daisies and meadow flowers. Normandy’s lush landscape lends itself perfectly to a wide range of garden types, such as the contemporary Bois-Guilbert Sculpture Garden, the regal park and gardens of the Chateau de Miromensil and the exotic Dragon Wood at the Shamrock Collection, home to many rare and beautiful Asian plants.

The Sussex gardens of Pashley Manor and Herstmonceux Castle are fine horticultural examples of what the English do best.