Garden to challenge the conventional at RHS Hampton Court 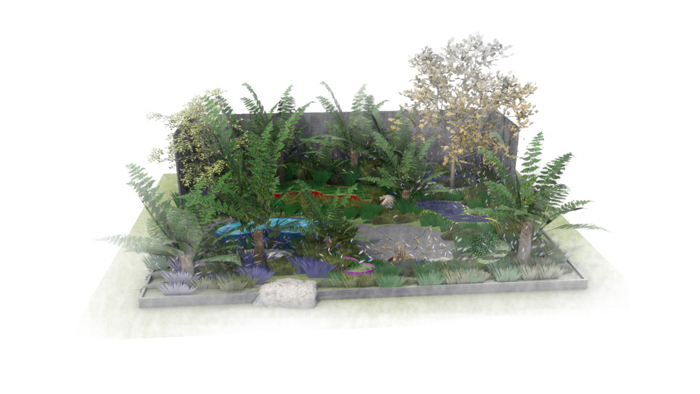 Andrew, who is also a Chelsea judge, has challenged designers to do something different, so he is nailing his colours to the mast with this Hampton Court garden by using hardy exotics, alongside British native plants, in a way that will challenge conventional show garden planting schemes and palettes. They hope it will encourage gardeners to rethink their plant choices given the impact of climate change.

The design is a city garden for a young Crohn’s sufferer and tells the story of how vital and vibrant a young person’s life can be even with this terrible disease. The garden has a canopy of tree ferns, its jungle-like plants and traditional ground foliage demonstrating a design approach for our warming cities. Cool tropical plants, chosen for their foliage and colour, appeal to a younger gardener. Hardy exotics like a Butia Yatay Palm, tree ferns, canna and ginger lilies sit with English native ferns and hostas in the shady and sunny parts of the garden.

The bright blue steel pool and the misters, which bring drama and add a tropical touch, reinforce the importance of hydration to bowel health. The gastrointestinal shaped, precision-cut, stone path and fire-pit allude to where Crohn’s strikes and what it can feel like.

Extreme fatigue, and the management of stress, is common for many Crohn’s sufferers. Our young gardener can enjoy ‘time-out’ in this garden – and not necessarily gardening.

It is no coincidence that individuals associated with the charity are advocates of the therapeutic properties of gardens and gardening. Charity founder Gary Douch, who has Crohn’s Disease, relaxes in his family garden; trustee Professor Devinder Kumar, a leading bowel disease surgeon and consultant, is a proficient gardener and; Andrew Fisher Tomlin designs active horticultural therapy landscapes. Helping to build the garden is a 28 year old horticulturalist, Scott Yates, who was diagnosed with Crohn’s when he was admitted to hospital aged 18 years old and weighing only seven and half stone.

The garden will provide a launch platform for a crowdfunding appeal to raise £150k to study the efficacy of a novel drug and the impact of targeted diets for those with Crohn’s Disease. The research will be led by trustee Professor Devinder Kumar – Professor of Gastrointestinal Surgery at St George’s University of London and Consultant General and Colorectal Surgeon at St George’s Hospital in London.

Generous donations of plants for the show garden have been provided by more than 10 suppliers and also materials and a unique humidity system for the more unusual shade plants.

The charity is working hard to make sure the garden goes on to raise funds for this important appeal. If the garden is not bought at the show it will be relocated to a private garden and become a fundraiser for an event later in the year.

Crohn’s Disease mainly affects young people and can be life-threatening. Treatment is expensive and becomes more complicated over time. Young sufferers will have to live with it for the rest of their lives. But with the right care, it is a condition that a person can live with. Bowl Disease UK is a small charity with no staff which is already making a difference. Professor Devinder Kumar is also a proficient gardener who first learned about gardening from a neighbour in India. His particular interests are his fruit trees and over 300 roses which he grows in his large garden.

If you want to know more about the charity Bowel Disease UK log onto their website at:
www.boweldisease.org.uk