Over 800 kilos of sculptured aluminium is on its way to the RHS Chelsea Flower Show where it will play a starring role in a dramatic Fresh Garden.

The crafted aluminium lace is heading from Europe on an extended articulated lorry to feature on ‘The Imperial Garden: Revive’, designed by Chelsea newcomer Tatyana Goltsova from Russia.

The task of transporting the metal lace, which will weave its way through the garden and up the bows of a beautiful old yew tree, was undertaken by the Lorberg Nursery in Germany, who have sponsored the tree and much of Tatyana’s planting. Lorberg had to hire in an extra-long vehicle to accommodate the tree and the additional 100 metres of the aluminium lace which weaves through the garden. 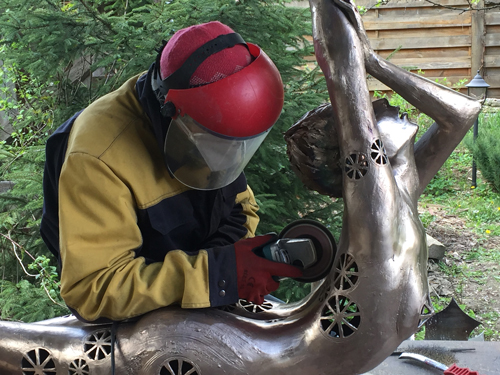 The tonne of aluminium has been painstakingly made by Ukrainian sculptor Victoria Chichinadze (pictured above) who has spent the last year hand cutting the aluminium into the lace design.

The sculpture will merge with the natural planting and the water feature before floating across the pond and on to form a swirling bench. Victoria, who has never shown her work at Chelsea before, has also designed the stunning bronze figurative water feature River of Time, which blends with the aluminium lace to create a key focal point in the garden.

The effect looks to be stunning and I feel sure that the lace will be a talking-point at Chelsea. Here’s hoping all goes well and it safely arrives at Chelsea this weekend.

Tatyana has created the Fresh Garden to conceptually explore the complex relationships between Russia, Ukraine and the UK. ‘The Imperial Garden: Revive’, considers what could happen if politics was removed from the world and as humans we all took a step back to focus more on what unites us. 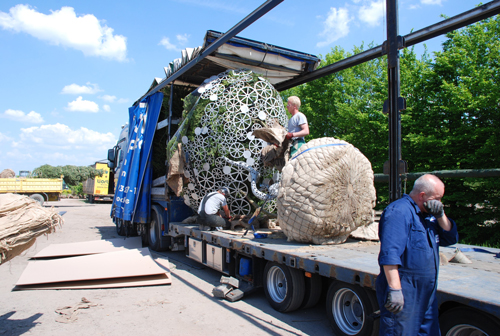 The symbolic theme of lace is important to the garden as traditional lace making has a centuries long history in the Slavic States. Tatyana, who runs a successful garden design practice in Moscow, is the first Russian garden designer to exhibit in the ‘Fresh Garden’ category and only the second Russian designer to have created a garden at Chelsea.

Tatyana explains that there were moments when they thought they were not going to be able to find a vehicle big enough to transport the sculptures: “Thankfully it’s now on its way to join us at Chelsea. This is my first time at RHS Chelsea Flower Show and I am so excited to be finally creating my dream. I wanted the garden to make a dramatic statement with the beauty of man-made materials and the natural planting merging together to conceptually illustrate the harmony that can be achieved between different nations. Victoria is an extraordinarily talented sculptor who has transformed my designs into reality when everyone else said it couldn’t be done, so I am delighted her work will now be shown on a world stage at Chelsea,” she said.

The garden is also to appear at the Moscow Flower Show in July.