Let’s hear it for the Chelsea girls 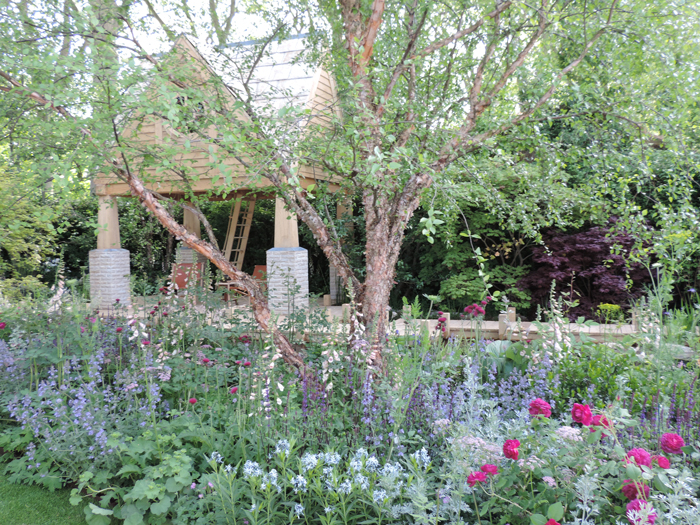 As last year’s RHS Chelsea Flower Show got underway, the Royal Horticultural Society (RHS) made a plea for more female designers to apply for Show Gardens at Chelsea 2016.

Only a third of the almost 200 show gardens created on Main Avenue in the past decade, for example, have been designed by women. In 2015 only two women designers featured on Main Avenue – Kamelia Bin Zaal, who was making her Chelsea debut and multi-gold medal winner, Jo Thompson, who created a stunning garden for show sponsors M&G (shown in banner above).

The ‘disproportionally’ small number applying to design show gardens for the ‘jewel in the crown’ plots on Main Avenue was highlighted in 2015 by RHS director general Sue Biggs who urged women designers to come forward with designs.

Previous female designers on Main Avenue have included Bunny Guinness, Sarah Eberle, Jinny Blom, Jo Thompson, Arabella Lennox-Boyd, Charlotte Rowe and Sarah Price. So what has happened in 2016 and how many female designers overall are showing at Chelsea across the three categories – Show, Fresh and Artisan.

Here is a brief but not exhaustive run-down of the picture for the 2016 RHS Chelsea Flower Show. I have the feeling that it’s going to be quite a year for the ladies, so I will start with the larger show gardens. 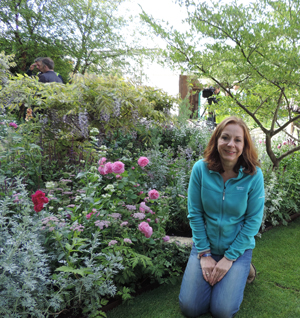 Jo Thompson (pictured left) will return to Chelsea with a garden for Qatari Diar – The Chelsea Barracks Garden – inspired by the heritage of the Chelsea Barracks site in London. Jo is one designer I really look forward to seeing at Chelsea and she can be counted upon to come up with something beautiful and inspiring. This will be her eighth time at Chelsea so fasten your seat-belts and be prepared for the wow factor. No pressure Jo!

Nurserywoman Rosy Hardy is no stranger to Chelsea and is the proud holder of 20 RHS Chelsea Gold medals. She is well known to thousands of Chelsea visitors who make an annual pilgrimage to the Hardy’s Cottage Garden Plants exhibit in the Great Pavilion. With husband Rob, she has built up an award-winning nursery in Hampshire, gaining a reputation for her plant knowledge.

So it is welcome news that for Chelsea 2016 she has accepted a new challenge and will be designing the Brewin Dolphin Garden on Main Avenue. ‘Forever Freefolk’ (pictured below) will challenge, engage and encourage visitors to recognise the fragility and unique nature of our English chalk streams. Certain to be a garden to look out for. 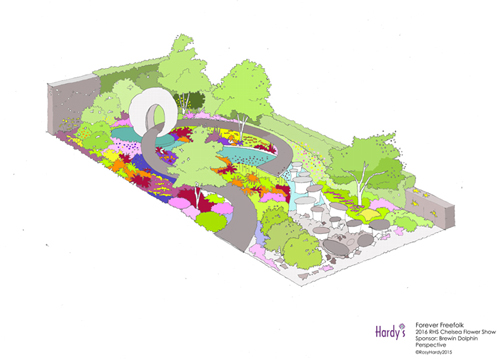 Catherine MacDonald will be at the helm for Hartley Botanics with their first ever show garden featuring an inspirational glasshouse from a design by Thomas Heatherwick (pictured below). With a scene evoking a rural garden in southern England containing a mixture of flowering perennials and vegetables, there will be lots to see. Carnivorous, tropical and aquatic plants will be featured in the glasshouse with the woodland scheme wrapping around the central water feature and glasshouse. 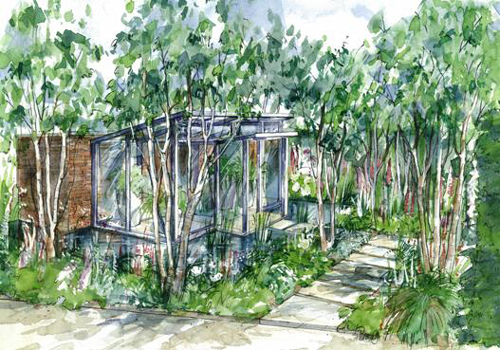 Leading garden designer and BBC presenter, Ann-Marie Powell, will be helping to shout about the RHS ‘Greening Grey Britain’ campaign with a celebration of the health and wellbeing benefits of gardening. Bright borders to green our front gardens will be the order of the day, and no doubt Ann-Marie’s bubbly personality will shine through to inspire us all to get involved in Greening Grey Britain.

Chihori Shibiyama is designing the Watahan East and West Garden with co-designer Tea Yano, inspired by the designers’ experiences within Japan and England. Chihori brings together a garden which is a reflection of two cultures – the stylistic principles of the manicured minimalist zen gardens of Japan and the asymmetric forms found within bonsai and ikebana while also incorporating the dense informal planting styles found in the UK.

The Fresh Garden category sees Claudy Jongstra in collaboration with Stefan Jaspers design a garden showcasing the age-old techniques of using plants to dye fabrics. The garden will contain plants that are all native and important for various kinds of wildlife. Aimed at demonstrating not only the beauty of plants but also the power of the colours they can produce – ‘Honeysuckle Blue’ sounds both a visually attractive and educational garden.

Juliet Sargeant is designing ‘The Modern Slavery Garden’ celebrating the passing of the Modern Slavery Act that became law on 26th March, 2015. I suspect there is going to be a lot of interest in Juliet’s garden with its important message.

It’s always a pleasure to see the ‘Queen of Herbs’ Jekka McVicar at Chelsea and this year she will be designing a garden for St John’s Hospice – ‘A Modern Apothecary’. The garden will be a quiet place of reflection highlighting the important relationship between medicine and nature.

Alison Doxey will be working with Stephen Welch on ‘The Garden Bed’ in the Artisan category. The design illustrates a view of a garden from a patient’s perspective from within a hospice. 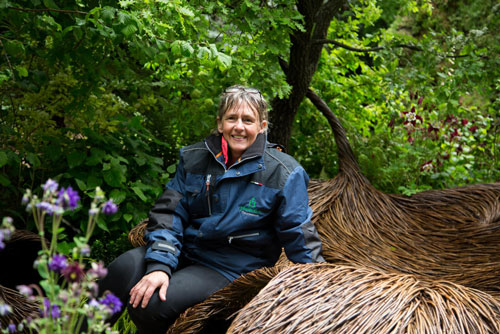 Also in the Artisan category, Chelsea favourite Sarah Eberle  (pictured above) will be designing a garden for Viking Cruises inspired by the Mekong. Sarah has won numerous awards including eight RHS Gold Medals and she is the perfect choice to capture the colour, energy and local experiences one encounters while travelling along the Mekong River in South East Asia.

Sarah is going to be extra busy at this year’s Chelsea as she is also designing the ‘Hillier in Springtime’ exhibit in the Great Pavilion. In a stunning departure from the traditional Hillier woodland exhibits of the past, Sarah has designed a Show Garden for plant-lovers, with the same exacting focus on plant quality for which Hillier is renowned.

Chelsea Show history is being made with the acoustic ‘Together We Can’ garden for the Papworth Trust. It will be the first time the Show has hosted an acoustic garden and the Trust is working with Dame Evelyn Glennie to celebrate the charity’s inclusive vision for disability. Dame Evelyn wants visitors to look at the garden and use the subtleties and elements of nature so they can feel and see an orchestra.

Russian designer, Tatyana Goltsova is making her Chelsea debut with ‘The Imperial Garden: Revive’, a conceptual Fresh Garden exploring the complex relationship between Russian, Ukraine and the UK. She runs a successful garden design practice in Moscow and is the first Russian garden designer to exhibit in the Fresh Garden category at Chelsea and only the second Russian designer to have created a garden at the Show.

So let’s hear it for girl power at this year’s 2016 RHS Chelsea Flower Show, it’s going to be a ball!