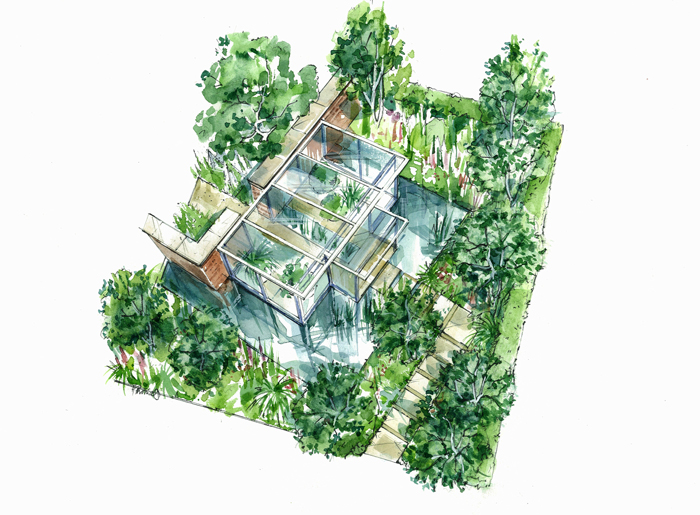 Hartley Botanic have been exhibiting at the RHS Chelsea Flower Show with an array of beautiful trade stands for close to sixty years. For the 2016 Show, Hartley will be taking their exhibit to another level with a show garden, designed by Catherine MacDonald from Landform UK.

The main feature of the garden, a stunning glasshouse, is attached to what would be a walled garden. The likely owner might be a large garden owning gentleman who wants a glasshouse as a retreat and a home for an assortment of tropical, aquatic and carnivorous plants and from which views of surrounding woodland could be appreciated.

The inspiration for the feature glasshouse came from a design by Thomas Heatherwick, one of Britain’s most gifted and imaginative designers. The glasshouse will appear to be emerging from a pool and will be constructed in a modern design with a powder coated aluminium finish. It demonstrates Hartley Botanic’s aim of celebrating their British engineered structures in a novel and forward thinking way that demonstrates their suitability for the contemporary as well as period home.

The scene will evoke a rural garden in southern England and the view from the greenhouse and surrounding water will depict woodland type planting. There will also be a mixture of flowering perennials and vegetables on the other side of the wall, in what represents the end of a walled garden that would in reality be much larger. This area will include plants such as Anchusa ‘Loddon Royalist’, Beta vulgaris, Aquilegia vulgaris and Lupinus ‘Chandelier.’

For information on the Hartley Botanic range log onto: www.hartley-botanic.co.uk