Rare tree flowers for only third time in 88 years 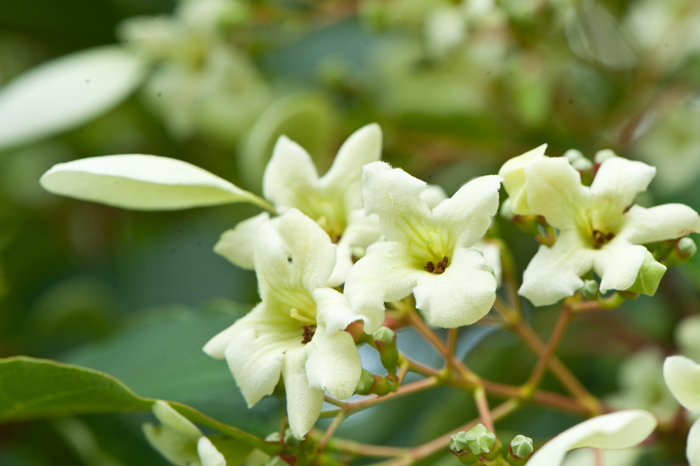 Emmenopterys Henryi, a highly rare tree originating from China, has teased the gardeners at Borde Hill Garden, near Haywards Heath, by modestly flowering for only the third time in its 88 year history. (pictured banner above)

The flowers are cream white and strongly scented with corolla white bracts. The deciduous tree is native to central and south-west China and was first introduced to Britain in 1907 by the great plant hunter Ernest Wilson.

The Borde Hill tree was collected by George Forrest and planted as a specimen in 1928. Now, the garden team are delighted to find the tree flowering once again. Its younger companion, which was grown at the garden from seed collected by a Kew Gardens expedition in the 1980s, has not flowered this year.

The Borde Hill specimen, grown from seed, originated from one of Forrest’s expeditions to Southern China – one of many sponsored by Col. Stephenson Robert Clarke over nearly 40 years. These expeditions helped create the notable collection of trees and shrubs at the Grade II* listed Garden at Borde Hill.

The garden was created in the early 1900s with plants collected by the great plant collectors from their travels to the Himalyas, China, Burma and the Andes. The garden contains the best private collection of champion trees in Britain and is one of the most comprehensive collections of trees and shrubs in the world.

The Stephenson Clarke family still occupy the Elizabethian Mansion, which lies in the 200 acre estate with stunning views.

Andrewjohn Patrick Stephenson Clarke explains that his great-grandfather planted the tree but never lived to see it flower, neither did his son or grandson: “We had to wait until the fourth generation of my family to see this amazing tree flowering,” he said.

Wilson described the Emmenopterys as “one of the most strikingly beautiful trees of Chinese forests”. Notoriously shy to flower in the west, it has reddish-purple young shoots and striking red leaves in spring, which mature to a glossy green, producing a shock of small white flowers. The first Emmenopterys to flower in the west was at Villa Taranto by Lake Maggiore, Italy, in 1971, while the first in the UK was at Kew Gardens sister site Wakehurst Place in 1987. It is thought weather extremes are likely to trigger flowering. The wet winter and hot summer may have helped to produce the flowers this year.

For more information on the gardens at Borde Hill, visit their website at: www.bordehill.co.uk