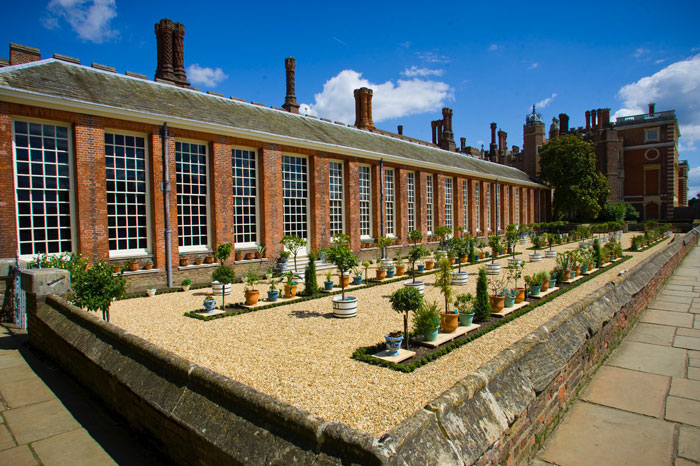 A special treat awaits visitors to the 2019 RHS Hampton Court Palace Garden Festival (2nd to 7th July) where they will have the opportunity to view Queen Mary II’s Exoticks National Collection as part of the Plant Heritage Zone.

Regular visitors to Hampton Court Palace may already be familiar with some of the very special plants that are looked after by the estates team at Hampton Court and the inclusion of this special national collection is sure to draw a lot of attention.

With intriguing names such as Flower for an Hour, Lipstick Tree and Marvel of Peru, the collection is one of only a handful of historically-themed plant collections recognised by charity Plant Heritage.

The Exotick plants are a recreation of part of Queen Mary II’s extensive 17th century plant collection. Certainly a ‘plantaholic’ of her day, she obsessively collected new, exotic tender plants for William and Mary’s gardens in Holland and England. Many of these were brought back from Dutch voyages to botanical hotspots such as South America and South Africa.

She employed her own botanist and in the 17th century, the plants were displayed in an area that was Henry VIII’s former fish ponds. In winter they were kept in glasshouses but by the early 20th century, Queen Mary’s original Exoticks had disappeared from the palace. 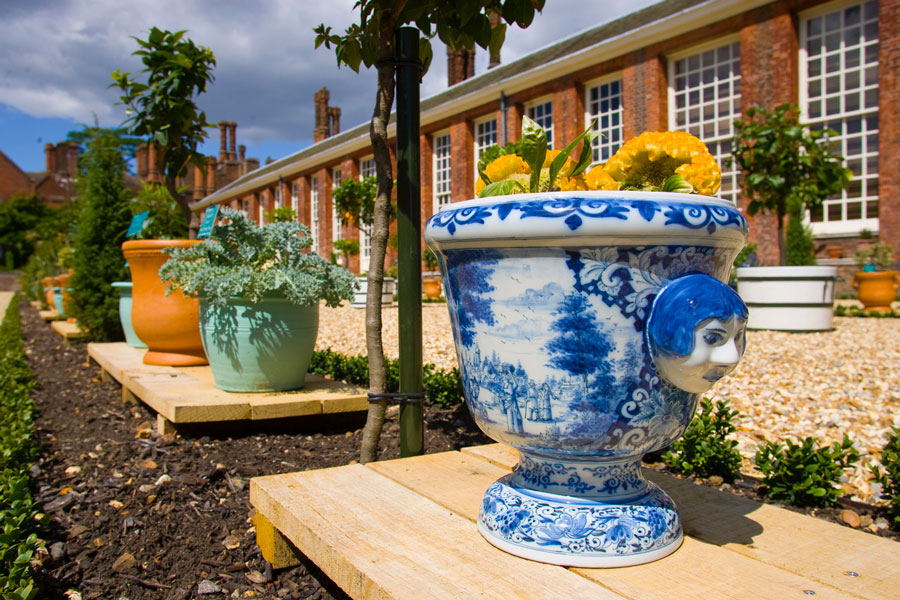 It was in the 1990s that a new collection of exotics was started by the Gardens and Estates team. The current collection of around 400 plants, from 260 different plant taxa, including nearly 100 citrus trees is ever expanding.

Barry Clarke will showcase new cultural introductions such as Rubus playfairianus, a rare Chinese species, the first time this has been grown in cultivation, and a new hybrid, also the first of its kind, Rubus nepalensis x pectinarioides.

Philip Oostenbrink will display Hakonechloa and Ophiopogon japonicus in a representation of a Japanese Roji garden – the garden outside a Japanese tea house which aims to calm the senses. Hakonechloa prefers a semi-shady position as full sunshine will scorch the often yellow coloured leaves, while Ophiopogon are used in Japan around water basins or rocks for accentuation and to soften their base.

Visitors to the Zone will also find Jonathan Hogarth’s Hostas where a new variety just landed at RHS Chelsea, ‘Ruffled Pole Mouse’ (mini-hosta) will be available to buy. Jonathan will be highlighting the cuttings method that John Carr developed, ‘Aeroponics’ to propagate cuttings of Hosta.

The Eden Project will be exhibiting their National Collection of Kniphofia – the herbaceous perennial indigenous to Africa with up to 70 species including six subspecies and four varieties.

Caerhays Castle are showcasing their collection of Podocarpus at Hampton Court for the first time too. Like other genera Podocarpus are threatened in their natural habitat, and Caerhayes is researching which species are hardy in the UK.

The Hebe Society will be showcasing these delightful plants, native to New Zealand and occurring naturally in the Falkland Islands and southern Chile. Possibly the most diverse genus of plants in the world of botany, they range from the large leaves and flowers of Hebe speciose to the tiny leaves of Hebe buxifolia.

Plant Heritage has a mission to conserve the diversity of our garden plants and does so by encouraging the establishment of well-documented and researched National Plant Collections, through its network of Plant Guardians and individual members.

If you are visiting the Show be sure not to miss out on the Plant Heritage Zone to see these fine examples of National Plant Collections and perhaps to take time to wonder at Queen Mary II’s Exoticks.