A hidden Gem in Helmsley 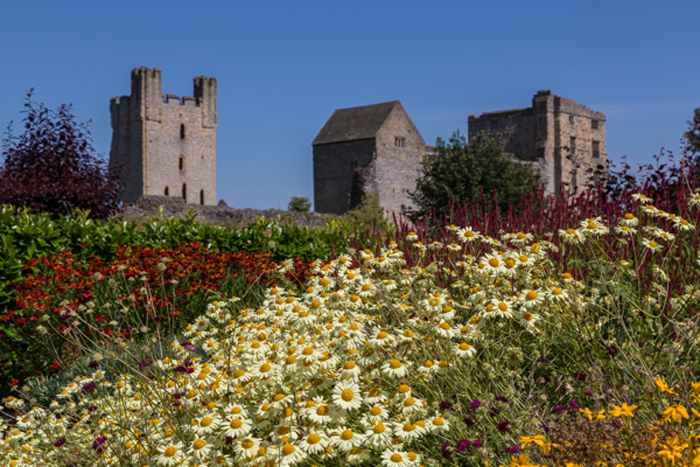 Sandy Felton discovers a hidden gem in Helmsley, Yorkshire, nestling under the walls of a castle.

I like to find hidden gardens – ones that come as a pleasant surprise where I can loose myself and find something different. Recently, on a visit to Helmsley I discovered just such a garden, although I am ashamed to admit that I should have known of its existence as it is currently celebrating its 21st year!

The Helmsley Walled Garden was built in 1759 and consists of five acres sitting beneath the imposing ruins of Helmsley Castle, which was built between the 12th and 13th centuries. The castle was latterly owned by the Duke of Buckingham, but when he died without an heir in 1687, the estate was bought by Charles Duncombe, a London financier and one of the founders of the Bank of England.

He built Duncombe Park in what had been the deer park of the castle and so the castle became a beautiful backdrop to his new mansion. The walled garden we see today was originally part of the castle grounds and in fact replaced an original garden which was further down towards the river and destroyed in a great flood in 1754.

The walled garden provided vegetables, fruit and flowers for the table of Duncombe Park being looked after by 19 gardeners until just after World War I. 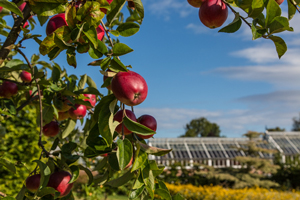 With the lack of gardeners after the War and the death of the 1st Earl, who was killed in 1915, it is no surprise that the estate was leased with the walled garden eventually becoming a market garden. Thus it remained, but when that business closed its doors in 1984, the garden fell into dereliction. (left glasshouses and orchard).

It had to sleep in its neglected state until 1994 when restoration started, giving the garden a new lease of life.

That lease of life became a reality through the strident efforts of a local woman Alison Ticehurst who had the vision of finding a garden that could become a place of healing and therapeutic horticulture. She realized that Helmsley Walled Garden was ideal for her purpose, although sadly by this time the garden was a wreck you could barely get into. Not put off by its state she gathered a group of friends and helpers and began the process of turning the jungle into a garden once more.

This amazing woman kept a diary from that first day until her death in March 1999, leaving behind a valuable written legacy showing what had been achieved in reclaiming the garden. Her inspiration and enthusiasm to get everyone involved in the garden and to carry on with the project, making it what it is today, is a wonderful testament to this extraordinary woman. 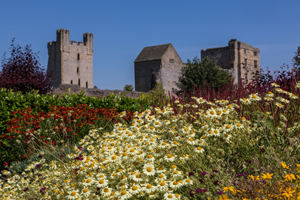 Unfortunately, as is often the case, I was unable to discover this “gem” in high summer, but I could well imagine from my visit in late March, what this wonderful space would look like in June.

Today, instead of the 19 gardeners who worked the garden before the First World War, the gardeners comprise both independent and supported volunteers. There are two horticulturists working with the independent volunteers – Helen Fletcher and Tricia Harris.  It was Helen who welcomed me to the garden and explained how the project was run and it was immediately clear that the need to help supported volunteers is as critical as ever.

The horticultural therapy team working with the supported volunteers comprise  Fiona Horsley, Heather Thomas and Fiona Thomas. Helen points out that supported volunteers come with a range of disabilities and in many cases the project is filling a need where someone perhaps slips through the gap of the care and support they need, especially those with mental learning disabilities or mental ill health issues. Helen explained: “We see a change in supported volunteers as time progresses and as we do not set a time limit on those we help the time limit a person is with us will vary.” No charge is made for the service, it is a social enterprise and so the project relies on profits from the garden to fund the horticultural therapy service. 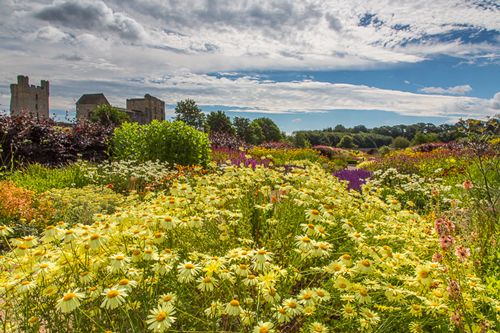 This beautiful garden gives volunteers space and peace, enabling disabled and vulnerable people to learn new skills in horticulture while at the same time being encouraged to develop their potential and strengths as well as improving their confidence in taking steps towards greater independence.

In 2015 supported volunteers working in the plant nursery at the garden will help to grow plants for sale in the plant centre, another major step in the development of this garden.

The newly restored glasshouses are full of colour and the hot border, a 120 metre double herbaceous border, which runs the length of the garden, is planted in vibrant reds, yellows and oranges. The wonderful wild flower meadows were just coming into flower on my visit, and the orchard, with a range of apple varieties in the Yorkshire collection, starting to come to life. 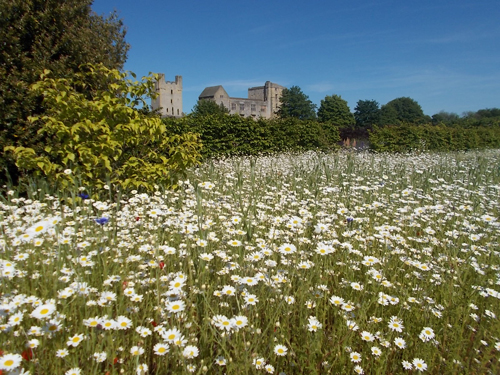 The kitchen garden grows produce for the café, while the community allotments provide space for local people and volunteers to have a plot to grow vegetables, fruit and flowers. In the ‘secret garden’ you will find chickens and bees which enables the sale of eggs and honey. There are espaliered, cordon and fan-trained fruit trees put up with the help of the Northern Fruit Group and a Physic Garden, developed two years ago with medicinal plants.

Whether you visit in spring, summer or autumn there will always be something to see in the Walled Garden and although I was visiting early in the season, I could already sense the tranquility of individual spaces within the garden such as the Garden of Contemplation or the White garden.

In addition to the plant centre there is a gift shop and the delightful Vine House Café, where visitors sit beneath a collection of heritage vine cultivars in the restored Victorian Vinery.

The garden also runs a number of courses including Bee-keeping and Botanical Illustration which members of the public can take part in.

The importance of horticulture in therapy is now becoming more recognized and there is clear evidence of the well-being and health benefits of gardening. 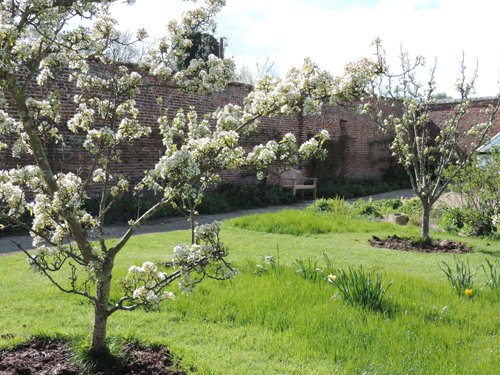 It is no surprise that there is a waiting list for places at the Helmsley Walled Garden, such is the demand for their services. The excellent work being done by people such as Tricia and Helen and the team as well as their independent volunteers, is to be applauded.

Not only is this enlightened project helping vulnerable people it is also looking after and caring for a special place that could so easily have remained in dereliction had it not been for the foresight of a remarkable woman.

The Helmsley Walled Garden is open from 1st April to 31st October, 10am to 5pm with last entry 4.30pm. Information about opening, facilities and directions can be found on: www.helmsleywalledgarden.org.uk